Gobble, gobble: Foods to pass over on Thanksgiving 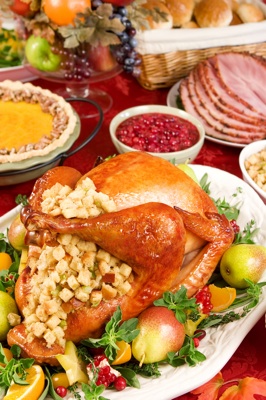 This Turkey Day, avoid those foods that will leave you feeling just as overstuffed as the bird itself. Yep, Thanksgiving is the day of feasting, (yum!) but by substituting a few traditional sides you will end the meal feeling perfectly satisfied—not bursting at the seams.

Go for the green stuff

Move over, stuffing. This year, we’re packing our plate with steamed broccoli, sweet potatoes and green bean casserole. Foods that center around veggies should take up the largest portion of your plate. Yep, that stuffing is delish, but it’s packed with refined flour and plenty of butter, stuff that’ll leave you feeling super sluggish before the meal’s even over.

Although gravy is the perfect complement to your mashed potatoes and turkey combo, laying off the sauce and going for a sprinkling of salt and pepper will keep you comfy. Can’t live without it? Go for just a tablespoon instead of a whole ladle-full.

Traditional pumpkin pie is made with flavor boosters and a creamy topping that will topple just about anyone after a big Thanksgiving meal. Rather than stuff yourself even more with fake flavors, cut a sliver of pecan pie. The nuts will provide some nutritional value for the day and leave you feeling just as satisfied.

Mashed potatoes
Piling your plate high with potatoes may seem like the healthy choice, but when made with butter and cream, those puppies lose a lot of nutritional value. Substitute Greek yogurt in place of heavy cream for a healthier (and lighter!) fluffy white side.

Ready to refresh your spring TBR list? 📚 Unbox six of the latest and greatest reads (worth $100) with our Bestie Book Box. Enter to win here!