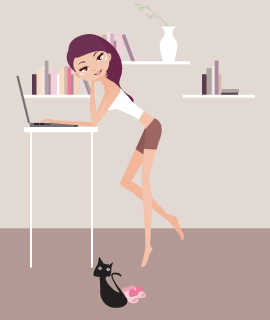 I'm very worried about my friend. She made up a fake MySpace and took a picture of a really pretty girl off the Internet to get back at boy at our school. She named her "Sarah."

Well, now she's completely attached to this fictional girl and instead of getting back at the boy, she ("Sarah") is going out with another boy at our school.
He's really into her, too and it's sad. I've tried telling her that she's going to get in serious trouble but she says nothing will happen. I can see where this is going, though, and I'm worried. Please help!

Hey there, Chica.  Sorry to hear about the tough sitch.  It can be such a hard job trying to look out for your BFFs, while also trying to support them.  It's great that you've brought up the subject before, but there are a few other things you should try to point out to your gal pal.  Sit her down for a serious convo; let her know this is really important to you.  If she realizes how much it worries or upsets you, she's more likely to really listen and take what you have to say to heart.


First, let her know how you feel. Tell her that you're worried, even though she thinks nothing will go wrong.  Explain to her that what started out as a plot for revenge has become something completely different.  She started the MySpace for one reason (though not such a good one), and isn't even using it to get the revenge that she wanted.  She's just involving more people.


Second, show her that what seems like "no big deal" could become a sitch where people seriously get hurt. She started the MySpace because she was hurt.  No one likes feeling rejected or tricked. What she is doing could def hurt the guy "Sarah" is dating.  While she may not think it's a big deal, he thinks he's going out with this great gal.  He didn't do anything wrong, but has become totally involved in.  In the end, she could hurt this guy as badly as the other boy hurt her.  Does she really want to put an innocent someone through what she felt?


Lastly, explain to her that after a while, everything will come out; try to find the root of the issue.  She can't hide behind this fake "Sarah" forever. The guy  will find out and feel like he was tricked. The longer she stays with him, the more he could be hurt. Word of mouth could lead to even more drama, and she could end up tangled in an even bigger mess.  Finally, help her to deal with the real problem (that's what friends are for, right?).  She was hurt and probably likes the attention and care this new boy gives her.  But if she wants someone who will treat her well like she deserves, lying is def not the way to do it.

Good luck, girlie! Everything will work out in the end.
~Kristen Y.

POSTED IN Friends, by bestie is spilling my secrets