Have you caught Selena's new CD? 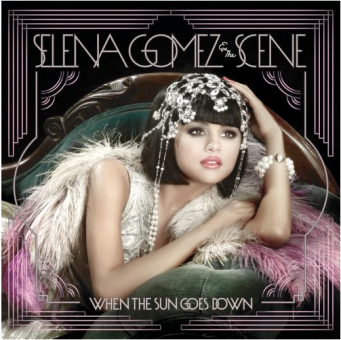 We’re sure many of you are already rockin’ to Selena Gomez and the Scene’s newest release, When the Sun Goes Down, which released last week.

This is the type of album you can imagine yourself listening to on a lazy summer night with your girls—it’s clean pop with a slight edge (contributed by Selena’s voice, which is both powerful and breathy). The entire album is incredibly danceable and super fun! Which are your faves? “Who Says” is the girl power anthem we can’t stop singing to but then there’s also “My Dilemma,” which will make you swear it’s as if Selena’s reading your mind. The Spanish version of “Who Says” is beautifully done and non-speakers will be powerless in falling for it.

The album boasts some pretty cool chicas writing for Selena’s voice, too! “Whiplash” bears some serious Britney Spears flavor having been co-written by the pop superstar. Another radio favorite, Katy Perry. co-wrote “That’s More Like It,” which sounds like a younger version of Perry’s own songs. Selena co-wrote two songs on the album, the title track and “Outlaw” too.

If to you plan on buying the album, but haven’t had the chance yet, you should absolutely grab a real, non-digital copy. The booklet contains some seriously fashionable photos of Ms. Gomez, channeling different eras—like the 20s-inspired cover—and styles! If you weren’t a fan of her fashion sense yet, you will be!

What do you think of When the Sun Goes Down? Have a favorite song yet? Blog about it, babes.
Love this post? You'll heart these, too!
» Buh-bye, boredom! Check out GL’s sizzlin’ summer entertainment guide

» Fashion face off: Who rocked it better on the red carpet? Weigh in!

» Get the dish on your fave celebs

WIN IT! Enter now to score a trip for two to NYC + tix to a Broadway show!