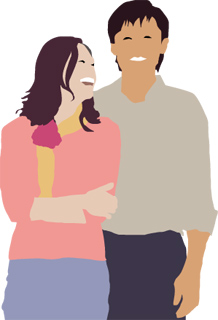 My friends always tell me I am too nice for my own good and now I believe them. There is this boy in my class who is mentally retarded and I try to be nice to everyone, so naturally I was nice to him and treated him like any other person  even though my classmates tease him.


But after a while it became a problem. I suspected that he had a crush on me, but then he sort of asked me out. It was really awkward and I didn't know what to say. The reason I don't want to go out with him isn't because of his disability, which wouldn't matter to me but I'm not ready for any type of relationship, and I do not think of this boy as any more than a friend.


What should I do?

Hey babe, major kudos for you for recognizing that this boy is just like any other boy your age. It's totally okay to say no to his offer to start a relationship, too. It might be a li'l awkward but talk to him and try to explain that you're not looking for a relationship right now. You don't owe him, or any guy, a huge explanation  about why you're not looking for one but a simple, "I'm enjoying being single now, but I'd still like to be your friend," is appropriate and to-the-point.


Try not to gossip or talk to your classmates about it too much either. Rejection is hard for any guy but it's probably even harder for someone who is already picked on. Any rumors and gossip will just make the situation worse. After you gently let him down, show him that you still want to be his friend. Give him a few days to recover and then talk to him as usual once things seem to have cooled off.


Like you said, treat him like you would any other boy and remember to be gentle and keep his feelings in mind, while still remaining true to yourself.

GOT YOUR OWN TOUGH STUFF SITCH? CLICK HERE to submit your own problem to be answered on Girl Talk!