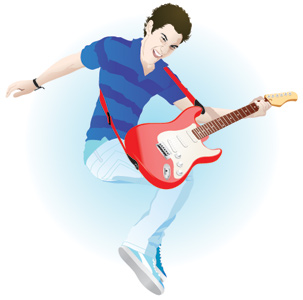 I told this guy that I liked him, and he also likes me. Anyway, we both think we’re too young to date, so we decided not to go out. But tomorrow I have band practice, and he’s in the band. It’ll be really awkward. Also, his best friend liked me, and I said that I liked the guy right in front of him, so I think his feelings are hurt. He’s also in the band. What do I do? What do I say? PLEASE HELP.

Oh la la…little bit of a love triangle huh? I am glad you and your crush have developed enough maturity to agree that neither one of you is ready for a relationship. Props for that. If the decision not to date was mutual, then there shouldn’t be any awkward feelings at band practice. If either one of you had wanted a relationship and the other didn’t...that would be cause for some concern. You both like each other,and you both know it, so just enjoy crushing on each other. Mutual feelings is a GOOD thing!! Just continue doing whatever you have been doing - it has obviously been working. If you maintain a relationship with him, when the time when you think you ready to have a relationship rolls around...he will still be an option.


As far as the best friend goes…that’s a little trickier. It’s never fun when you accidentally hurt someone’s feelings, especially when l’amour (that’s French for love, I’m feelin’ a little jazzy today) is involved. That situation may be awkward, but probably more on his part then on your part. After all, you totally dented his ego. The only way to stop a silly situation before it starts is to not be awkward yourself. Say hi to the kid and ask him about his week. Making convo will show him that you want him to be comfortable around him, and that you enjoy his friendship. By the end of the week it will all just be water under the bridge. A hard fact of life is that not everyone you love, loves you back. Think of it as a little learning experience.


Do not, I repeat, DO NOT think that ignoring him will make the situation better. It will actually magnify things. He will think that you’re ignoring him because you don’t like him and then he will ignore you back because he is embarrassed and let me tell you…there is NOTHING worse than awkward silences. And if your admirer is your crush’s best friend, then it better for you to stay on his good side.