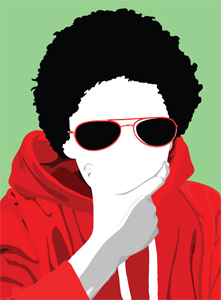 OK, so my BF is driving me crazy. We have been going out for five months and he hasn’t called me yet. He and my friend flirt a lot. Today at lunch I sat down beside him and said "Hey." He just looked at me like I was crazy and started talking to my friend. She and another girl and the guys are the only people he talks to. What should I do?

It sounds like your BF belongs on an America’s Most Wanted List. Does he even know what being in a relationship means? And what kind of “friend” flirts with your boyfriend? Its sounds like you have to do some serious damage control.


First of all, your feelings are completely justified. I would be soooo annoyed. The not calling you part isn’t so bad, some people aren’t comfortable talking on the phone, and if you are the first girlfriend he has ever had, he probably hasn’t gotten that part down yet. But the flirting with your friend and ignoring you at lunch…that is a big No-No! You need to have a major peace keeping pow- wow.


Sit your BF down and tell him that he hurts your feelings when he looks at you like you have a booger on your face. Explain to him that you are just trying to make conversation with him (couples talk to each other) and that you enjoy his company. It may be that he is still uncomfortable about being in a relationship with you. As for the flirting, he may not realize he is doing it, but it can be corrected. Tell him its NOT OK, especially with your friend and that you don’t flirt with other people because you are in a relationship and really,really like him. If he has any class he will say sorry and stop doing it. If he doesn’t I think you need to give him the boot. You are too good for him and should be with someone who understands that being in a relationship means being emotionally and physically faithful. Your feelings should be one of his top priorities.


As for your friend, tell her that you appreciate her friendship, but she makes you uncomfortable when she flirts with your boyfriend. Its an unspoken rule that once a girl starts dating someone, that guy becomes off limits to all pals. If she values your friendship at all, she will stop. If she doesn’t…get a new friend.