Top 5 Signs He Likes You! 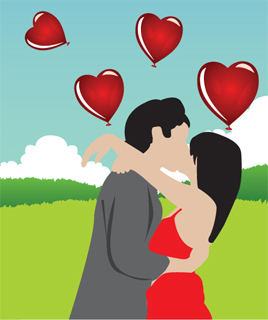 Sometimes it’s SUPER hard to tell if the cutie you’re crushin’ on likes ya back. Let's face it gals, guys can be incredibly confusing to read. One day he's crackin' jokes with you in the caf, and the next day he’s looking down at the floor as you pass in the halls! Don’t you wish you could just get inside your crush’s head and see what’s up!? Don’t get too frustrated because GL's has the top five signs to see if the boy of your dreams is REALLY into you.


It’s one thing if your super stud talks to you when you're assigned to the same science group. But when a dude stops dead in his tracks on the way to homeroom to say what's up? Um, he's definitely into you.


Other ways to see if he’s def crushin’? Excuses, excuses! If you notice your crush going out of his way to ask about the homework in class when you know he was paying attention, he's sooo making up reasons to chat you up. Give him the assignment and take it a step further by asking him to study with you!


Boys are extremely visual by nature. If a boy likes you, he won’t be able to keep his eyes off you. Ever catch your crush starin’ at you in math class? Chances are this dude totally digs ya. He may try not to be completely obvious about it, but sometimes staring is out of a boy’s control.


Confused whether your Romeo is staring at you in math 'cause he's bored with algebra or if he's totally feelin' for you? Put it to the test at your school dance or a Saturday night shindig. It's one thing if a dude is staring at you across the classroom, but quite another if you catch a cutie starin' at you through a big crowd.


Guys love when girls share similar interests with them. Sure, you’ll always have some diff hobbies (um, hello, what is up with the INSANE Xbox obsessh?). But, a guy who’s ga-ga for you will chat you up about stuff you have in common. Are you both into basketball? If this fella's constantly bringing up your fave team (or starts teasing you about how much your team “sucks”), giving you pointers on your layup or talking about his new sneaks, you can bet this hottie is head over heels!.


When a cutie is interested he’ll also be curious to learn specific deets about your day-to-day…even if your activities are sooo not up his ally. So your sweetie who didn’t know a flute from a clarinet is suddenly showing up at your band concerts?  Yeah, this dude definitely likes ya!

When it comes to dating, guys are way shyer than you think. Dudes constantly fear rejection, so instead of having the courage to talk to you, and ask you out, himself, he’ll probs have his friends scope out your sitch. It’s always easier to have a messenger do the dirty work!  If one or more of your crush’s friends comes up to you and asks questions about your feelings for him, don’t be fooled…your fella definitely asked them to do this.


Your boy may also chat up your BFFs to see what your deal is. If he suddenly starts asking your bestie what “you guys” are doing this weekend, he’s probably just trying to get more info on you.

You’re not the only one who gets nervous around your crush! Boys get flustered around the girl they dig because they don’t know what to say or do. Does he get red in the face or smile and quickly look away when you catch him a-gazin'? Aww, you’ve got a shy (and interested!) guy on your hands, girlie.


Does your dude get tongue tied during convos? If Mr. Class Clown suddenly loses all his jokes and gets a stammer when you’re around, it’s another surefire sign that this cutie has a crush on Y-O-U!

BLOG IT OUT, BABES! What does your crush do around you?