Are the Rumors True? 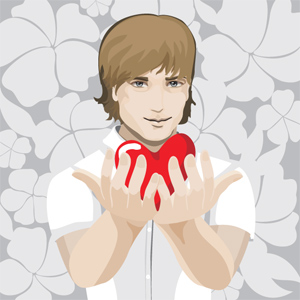 OK...There's this guy that's in my science class and I totally like him. He stares at me and talks to his guy friends about me and stuff and telling everybody that we go out when we really don't. The thing is...I heard rumors about him saying that he likes this other girl...

So, does this guy like me? or Is he a total joke? How should I approach this guy? Thanx!

Either he’s totally crushing on you…or he is a complete wack job. It's kinda shady but flattering that he has been going around telling people that you two are dating each other. First things first, I would ask him about that. Nobody likes being left out of the loop, especially when the gossip is about yourself. I would approach him and say, "I heard you have been telling people that we are dating each other. Is this true?” If he fesses up, then you have a platform to see how he feels about a relationship and you make get the chance to let him know how you feel.

There is the chance that the rumor about you two is completely made up by someone who just doesn’t have their facts right…which is the case for most rumors. If this guy denies that he has been saying anything of the sort things could get awkward, but I still would use the opportunity to tell him how you feel. Remember that just like the rumor about you and him dating isn’t true, the rumor about him liking another girl may also be untrue. It doesn’t hurt to ask.


It’s a good sign that he talks about you to his buds. Guys usually don’t get mushy enough to let their buds know how they feel. My go to advice for situations where things a completely unclear is to approach him with a huge smile on your face an just ask. You don’t lose anything by trying to clear the air. If you don’t ask, you may hold onto some of your dignity, but you may also miss out on the chance to get to know this guy a little better. So put yourself out there, you really have nothing to lose!!