What is liquid chlorophyll and why is it blowing up on TikTok? 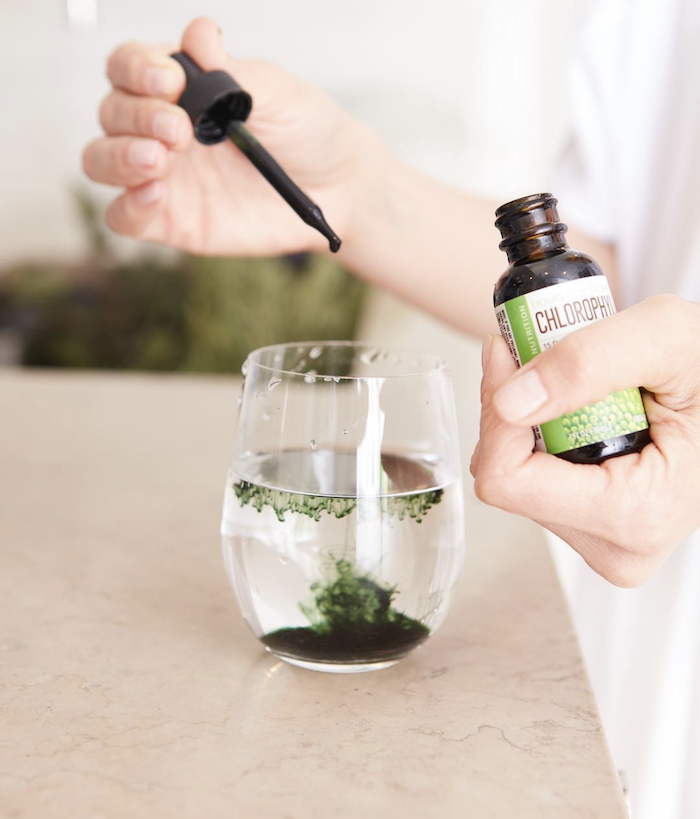 Picture this: You’re scrolling through TikTok like you do *every* night as you’re falling asleep. You’re about to doze off but something catches your eye that makes you stay awake for a few minutes longer. Someone is drinking this oddly colored green drink. You quickly learn that it’s liquid chlorophyll mixed with water and it’s supposed to have a ton of health benefits. Should you go to the store tomorrow to try it out yourself?

First things first...what even is chlorophyll?

We all learned about chlorophyll in elementary and middle school science class. It's the pigment that gives plants their green coloring. However, the liquid chlorophyll on TikTok isn't exactly the same. Liquid chlorophyll supplements contain chlorophyllin, which makes it able to absorb in the human body more easily.

What are the benefits of chlorophyll water?

Chlorophyll actually has so many vitamins and antioxidants that can benefit your body in various ways. Some of the benefits mentioned on TikTok that made this supplement go viral are:

This is something that isn't exactly scientifically proven. Some TikTokers noticed that after they started drinking chlorophyll they were significantly less bloated. The only explanation for this at the moment is that anti-inflammatory agents—like chlorophyllin—can help you maintain a healthy gut...which leads to a faster metabolism and aids in digestion.

Like we just mentioned, maintaining a healthy gut can speed up your metabolism.

Think of chlorophyll as an internal deodorant. It has the power to absorb unwanted smells as it detoxifies your body.

Can help clear your skin

Many of the people on TikTok telling you to go buy this product are saying it can get rid of acne. The chlorophyllin in the liquid green drops has been shown to reduce inflammation.

Antioxidants make your body happy. Your body's immunity can improve after consuming chlorophyll in any form. Studies reveal that chlorophyll may even have some anticancer effects.

The same way plants are able to convert light into energy from their chlorophyll combined with the sun also applies to animals. When animals and mammals have a diet high in chlorophyll and spend time in the sunshine, more energy is produced.

Are there any cons to liquid chlorophyll?

The doctors of TikTok are getting involved with this new trend. While some say it wouldn't hurt to have a few drops of it a day, others are warning people about the lack of research behind it. Some TikTokers are even talking about their negative experiences with it.

Is there anything else I should know?

There isn't too much research out there relating to chlorophyll water and its benefits. The wise world of TikTok is always proving that some of these benefits do actually happen, while doctors are saying it may just be easier to eat your daily dose of chlorophyll through veggies—which have even more nutrients.

Have you tried chlorophyll water yet? Share your thoughts with us on social media @girlslifemag.