25 years ago today Alicia Silverstone took on the role of Cher Horowitz in the rom-com movie Clueless. Little did she know, Cher would become a pop culture icon for her spectacular fashion sense, matchmaking skills and sassy attitude. The film was first inspired by Jane Austen’s 1815 novel Emma, as many of the characters in Clueless have similar personality traits to those featured in Austin’s novel.

Written and directed by Amy Heckerling, Clueless has become a slumber party *must*! It is the *go-to* movie for all things crushes, gossip and beauty. As it revolves around the drama-filled lives of Cher and her bestie Dionne Davenport (played by Stacey Dash) better known as “De” in the movie. Whether this is your first time watching the movie, or your 100th time, you're going to *adore* seeing Cher and De conquer the social stresses inherent to life in Beverly Hills, especially, their *boujee* Beverly Hills high school. The stresses consist of figuring out boys, relationships and how to go about helping the new girl at school, Tai Frazier (played by Brittany Murphy) get a whole new *lewk*! Being the queen of all things fashion and beauty, Cher decides to make Tai her new beauty project. She finds Tai all new clothes and covers her in luxurious makeup.

However, when Tai started getting attention from the popular kids, in addition to *the hots* for Cher's secret crush Josh, things started to go downhill with their friendship (UGH! AS IF!). Cher’s relationship with her ex-stepbrother Josh (played by Paul Rudd) is full of constant bickering given Josh is a nerd and Cher, well, isn't. However, this relationship ends up taking a *huge* turn by the end of the movie, making the final scene between Cher and Josh a signature *staple* for the movie Clueless.

So what are you waiting for? Get on your most stylish 90’s *fit* for a nostalgic zoom Netflix party with your besties to celebrate the 25th anniversary of this teen flick!

Who's your *fave* character in the movie? Let us know on IG @girlslifemag! 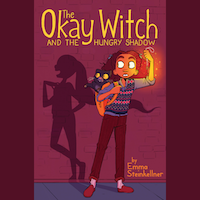 Sabrina the Teenage Witch meets Roller Girl in these hilarious graphic novels about Moth, a half-witch who has to juggle her new powers with family drama and middle school. Enter to win here!