10 fun facts straight from the set of Stage Fright

Looking for a new series to binge-watch while cooped up in your house?

My new Brat TV show Stage Fright is a brand-new mystery that premiered just yesterday, featuring a fabulous teen cast—from Sophie Michelle to Dance Moms' Pressley Hosbach. It revolves around present-day Crown Lake students who must work together to find out who dropped a chandelier on the lead in the school production of The Phantom of the Opera. My character, Karina, is the theater critic for The Crown Lake Chronicles...but she may not be entirely guiltless. As you try to piece together the mystery, check out some behind-the-scenes fun facts from filming below.

1. During the table read, I introduced myself as the wrong character!  I was so nervous on my first day, so when I was told to introduce myself, I said, "Hi, my name is Carrie, and I play Tuesday." I wasn't thinking—it was so embarrassing!

2. Craft services were everything. Each day, the cast and crew would be treated to an array of snacks (cookies, chips, fruit, granola bars and more!) as well as themed lunches that we ate outside at picnic tables. "Mexican Fiesta Day" was definitely a standout.

3. Cast members under 18 had to do three hours of school on set during weekdays. Since we had to film during the day, we would fit in school blocks whenever we could. Sometimes, I would sit and do my calculus homework for 20 minutes before I was pulled back into hair and makeup!

4. We changed into costumes in avocados. No, they weren't actual avocados. Just large, avocado-shaped tents that we could change clothes in while shooting on location. 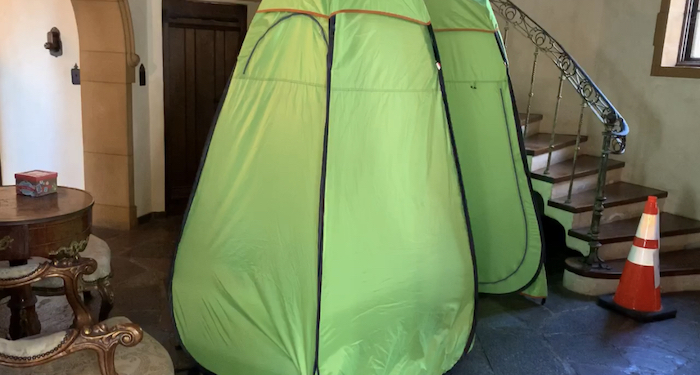 5. Call times were super early. Some mornings, we had to be on set as early as 7. Thankfully, crafty had an entire breakfast buffet set up!

6. Karina's glasses were initially a black cat-eye pair. Before I was assigned my signature circular beige glasses, I was supposed to wear a different pair. In the end, I loved the beige ones, and I actually bought a similar pair of blue light glasses to use when I got back home.

7. We filmed *a lot* of TikToks. We were all so excited when our three hours of school were finished for the day because it meant we could film TikToks! It has been super hard not to be able to post the videos in costume for two months.

8. There was a prank war going on. One day, Skyler, Sophie and I told crafty that the food was "disgusting," and they ran out to see what we were talking about. When they realized we were lying, everyone burst into laughter.

9. Our director, Dan De Lorenzo, gave us disposable cameras. He wanted us to be able to cherish our time on set, so we each got cameras to take images that we could develop later on. Full disclosure: I haven't had the time to look at the photos yet!

10. On our last day, we all dressed like the first A.D., Alex.  Alex is known for his Bermuda shorts and knee-high pineapple socks, and we all decided to adopt his style on the final day as a joke. Everyone looked the same (even the adults!), and it was hilarious.