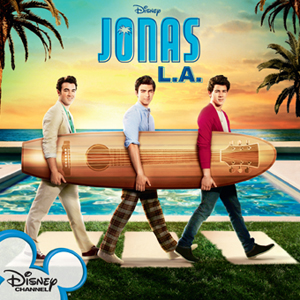 Hey, JoBros fans. If you’re keeping up with the new season of JONAS L.A., you’re going to love the soundtrack that goes with it. This new album, titled JONAS L.A. as well, (available today, July 20) is sure to please most every listener.

This CD, loaded with songs from the hit show, definitely stays true to the Jonas Brothers style. But it also has a variety of new sounds, too, including, rock, acoustic and even a little bit of funk and jazz. Filled with tons of energy, it will definitely keep your summer parties rocking.

The song “Feelin’ Alive” is a great way to get any day started, helping you to let go of the problems from yesterday. It gives you hope for a new great day. Who wouldn’t be pumped for that? The track “L.A. Baby (Where Dreams Are Made Of)” (another one of our faves) is not only the theme to JONAS L.A., but it’s a great summer jam to listen to anywhere. Nothing brings up your mood like an awesome upbeat song.

As expected, this album includes songs about romance. Whether it’s “Your Biggest Fan,” a song any girl would want their boy to serenade them with, or “Things Will Never Be the Same,” about a relationship that doesn’t work out, this album appeals to both those in love and those healing from a broken heart.

Be sure to pick it up a copy of the JONAS L.A. soundtrack and let us know about your favorite track.

Which is your favorite JONAS L.A. episode? Blog about it, babes.