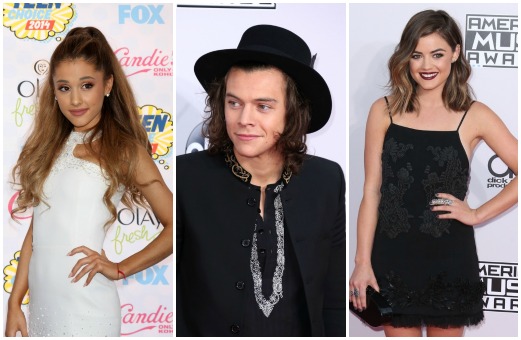 Christmas is another week closer! While you’re out buying gifts, decorating the tree and cramming for tests, all of your fave celebs are keeping busy this holiday season. Who’s hitting the road and who just survived an angelic whack? Read on to find out.

The 2014 Victoria Secret Fashion Show happened this week in London and Ariana Grande, Taylor Swift and Ed Sheeran performed on the runway. Ariana is always picture perfect, but after a model accidentally ran into Ari on the runway and hit her with her angel wings, she had the most perfect reaction that has since gone viral. The Twitter queen was quick to address her now meme-d face by tweeting “A Victoria's Secret angel accidentally smacked me in the face with her wings and it was awesome #goals #bangbangintomyface."

We reported a few weeks ago that Girls Meet World was picked up for a second season. Now we can tell you filming is already happening! Ben Savage (Cory Matthews) loves to tease fans with BTS snaps and this week he revealed that old favorites from Boy Meets World will be making a return in Season 2! Mr. Feeney, Eric, Shawn and Mr. and Mrs. Matthews are all set to be making multiple appearances. And by the pic, it looks like the gang is all back at their old stomping grounds in Philly. We can’t wait to see what happens!

Harry Styles is known for a new fling every December, and this year he has already crossed paths with two former loves. At the British Fashion Awards this week, Harry ran into BFFs Kendall Jenner and Cara Delevingne. From the looks of it, the three chatted for a few moments and went their separate ways. Seeing two of Harry’s old flames together made us remember all the times we spent scouring the Internet looking for pics of them in Central Park. All we needed was for Taylor Swift to be there to make it a real party.

Actress-turned-singer Lucy Hale is topping the charts with her debut album, Road Between. After doing tons of promo and radio tours, Lucy announced this week that she is finally packing up for her first ever headlining tour! Instead of taking a break in between filming for Pretty Little Liars, Lucy is hard at work to make this the best concert for her fans. From drama actress to country singer, we don’t think there’s anything Lucy can’t do. CLICK HERE to see if she’s coming to a city near you.