7 Hispanic and Latina women who have changed society

October 15 marks the end of Hispanic Heritage Month, a time to reflect on the contributions that the Latino community has made to society, while also appreciating their history and culture.

In honor of Hispanic Heritage Month, here are 7 Hispanic and Latina women who have changed society for the better. These women provided representation for the Latinx community in each of their respective fields. From being an astronaut, to being an actress, they proved that women can be anything they want to be, no matter the profession. They opened doors for little girls everywhere to pursue their dreams. They broke barriers for both the Latinx community, and women as a whole, eliminating gender and racial stereotypes in the process. Make no mistake about it-these women helped pave the way for future generations to come.

Ever wonder who helps make laws for the country? Well, look no further than Sonia Sotomayor.

Sotomayor attended Princeton University for her undergraduate degree, and then went on to obtain her law degree from Yale University. In 1979, she served as an assistant district attorney, before moving up in the ranks as U.S. District Court Judge. In 1997, she worked in the U.S. Court of Appeals for the Second Circuit. In 2009, Sotomayor became the first Latina U.S. Supreme Court Justice.

In 1993, Ochoa became the first Latina woman to travel into space. Onboard the Discovery space shuttle for nine days, she researched the Earth's ozone layer. During her time at NASA, Ochoa went on four space missions altogether and logged 1,000 hours in space total.

Ochoa eventually went on to become the first Latina director, and second female director of Johnson Space Center in 2013.

Now, how's all that for a resume?

You might know this superstar as the "Queen of Tejano Music", or as simply "Selena". Whichever it is, there's no doubt that she's a legend.

Selena Quintanilla began performing as a child in her families' band, Selena y Los Dinos. The group played for weddings, parties, and other events in Texas.

As she got older, Selena began to make a name for herself in the music industry. She sung her way into fans' hearts with hits like, "Como La Flor", "Amor Prohibido", and "Bidi Bidi Bom Bom". With a stage presence like gold, she wowed the crowds with striking vocals, dazzling outfits and a charismatic personality. Selena eventually won several music awards, including a Grammy.

Tragically, Selena's life was cut short when she was shot and killed by her fan clubs' president at the age of 23. Her album, Dreaming of You, was released posthumously.

Her legacy still lives on today, with fans honoring and paying tribute to the singer. Her story was even brought to the big screen in the 1997 movie, Selena.

She helped clear the way for women writers after her.

Born as Lucila Godoy Alcayaga, she took on the pseudonym Gabriela Mistral later in life. Mistral was a poet, often writing about her own experiences and causes she cared about. Her poems conveyed deep emotions, such as love and sadness. Mistral was the first Latina author to win the Nobel Prize in Literature.

She worked as a lecturer and educator, while also traveling. Mistral championed for the rights of poorly treated groups of people, such as women, children, Native Americans and Jews. She often spoke up for them in her poetry.

Want to be an activist? Dolores Huerta could tell you a thing or two about it.

Originally working as a teacher, Dolores Huerta resigned after becoming upset over her students' poor living conditions. Many of the students were children of farm workers, and so Huerta knew that something needed to be done about the farm workers' plight.

She went on to become a labor activist, forming a grassroots organization that held voter registration drives, promoted economic improvement for Hispanics, and strived to end segregation and discrimination of farm workers.

Eventually, Huerta became the co-founder of the United Farm Workers, which worked to improve the working, social and economic conditions of farm workers. She coined the group's influential slogan, "Yes, we can".  Through protesting and lobbying, Huerta helped bring about change for farm workers.

Do you recognize this face? If you do, it's for good reason.

Maria Elena Salinas is the longest-running female news anchor on U.S. television. For over 30 years, she has delivered the news to the masses. She was the co-anchor for Univision's news broadcast, Noticiero Univision, and for it's news magazine program, Aqui y Ahora. Salinas is the first Latina to earn a Lifetime Achievement Emmy.

Called the "Voice of Hispanic America" by The New York Times, Salinas uses her platform to talk about issues in the Latino community. These include immigration, education, increasing Latina voter registration, and helping Latino youth in journalism careers.

Salinas recently departed from her role at Univision, but continues to use her platform to help the Latino community.

Ever dream big? Rita Moreno did. In fact, she dreamed so big that she became one of the most well-known movie stars in her time.

Known for her role in the film, West Side Story, Moreno made her mark in the entertainment industry. She is the first Hispanic woman to receive an Oscar (Academy Award). From there, Moreno went on to become the first Latina PEGOT recipient-which means that she received a Peabody, Emmy, Grammy, Oscar, and Tony award.

She delighted fans through the years, becoming a cast member on The Electric Company, and appearing in the musical, The Ritz. Moreno contiuned to make appearances in other television shows and movies.

Fave hot drink to curl up with? 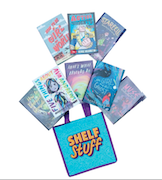 One book-loving babe will score the *ultimate* bundle from Harper- Collins: Eight fall must-reads in an adorable tote.
[Enter to win here!]