ON JUNE 4, SIX TEEN GIRLS USED SOCIAL MEDIA TO ORGANIZE A BLACK LIVES MATTER PROTEST IN NASHVILLE. OVER 10,000 PEOPLE SHOWED UP. HERE THEY SHARE WHAT IT FEELS LIKE TO JOIN A MOVEMENT—AND WHY TEENS NEED TO GO BEYOND A HASHTAG. 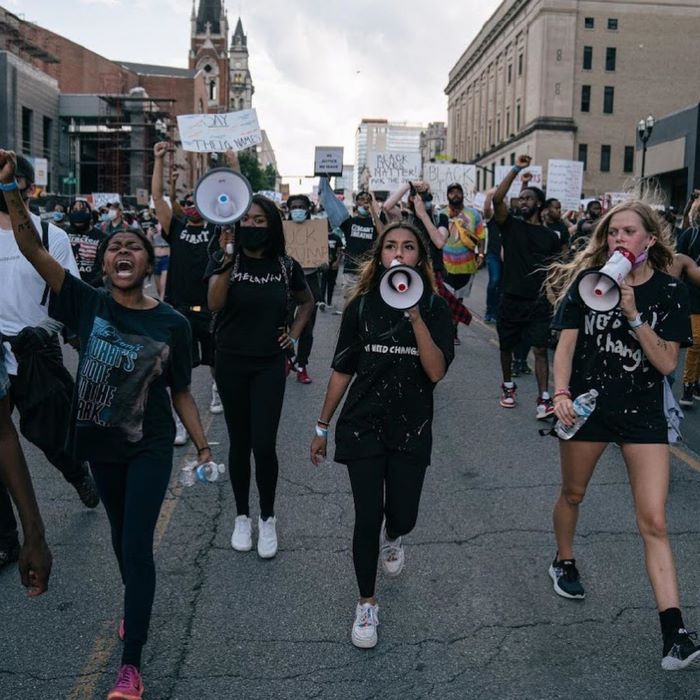 IT ALL STARTED WITH A TWEET: "If my mom says yes, I'm leading a Nashville protest," posted 15-year-old Zee Thomas. She had no idea that in just eight days, those 52 characters would lead to five new friends—and become the catalyst for a 10,000-person-strong protest in support of Black Lives Matter, a movement founded in 2013 that's centered on advocating against violence and systemic oppression inflicted on the Black community by police and others.

"I was inspired seeing people protesting across the country," says Zee. "I'm thinking, 'Why doesn't Nashville do something?' I decided I'd try to help organize a protest," she reflects, "and, well, it worked."

Mikayla Smith, 16, also was looking for a way to take action. "I have a little brother and sister," she says. "It's sad that my mom has to explain to them what to do when a cop pulls them over. 'Don't move this, don't touch that, don't say this.' You don't have to tell a white person that. It's unfair and unjust."

When Mikayla saw Zee's protest flyer on Twitter, she decided to get involved. "I didn't even know I was going to help plan in," she adds, laughing at the memory, but soon Mikayla was part of a group text with Zee and four other Nashville teens: Nya Collins, 16, Jade Fuller, 15, Kennedy Green, 14, and Emma Rose Smith, 15.

"That's when everything fell into place," Mikayla remembers. Teens4Equality was born—and soon the group was planning the region's largest protest against racism and police brutality in recent history.

A week later, the girls met in Bicentennial Capitol Mall State Park, where they hatched a plan to make a difference—and make history along the way.

While the girls could have stuck to spreading their message on social media, they decided that an in-person protest would have the strongest impact.

"You can post on your Instagram or your Snapchat, you can sign petitions—but when you are actually out there, you are doing something bigger," says Kennedy.

Of course, organizing an IRL protest has its challenges. "It's hard," reveals Nya of the many logistics they had to think about, from parking to ensuring safety to keeping marchers hydrated (think: endless cases of water and Gatorade). But remembering the "why" kept the group super motivated and pressing on with their plan.

"As a person of color living in a predominantly white area, this affects me every day. I've noticed things that haven't always sat right with me," says Jade. She remembers how, in elementary school, people would always ask to pass the "skin tone crayon" referring to one of the lighter shades. "It always forced a mindset that white was the model."

The girls also thought about all the people of color who were hurting, and the times they've heard casual use of racial slurs by classmates and failed to speak up. They also reflected on their own family members and friends who may one day be unfairly targeted by police and other because of the color of their skin.

"It's crazy how society works," says Kennedy. "How when another Black person dies by police brutality, it's just normalized. I have a little brother and, when he gets older, he'll be a Black man. I don't want him to walk around with a target on his back. That's the change I want. Not only for him, but for all the youth—the people who are born after me. I don't want them to grow up to fight for the same rights I'm fighting for."

On June 4, the girls gathered together in downtown Nashville, prepared to welcome a crowd of a couple hundred people. By mid-afternoon, some 10,000 marchers had joined them.

at the start of Nashville's Black Lives Matter/Teens4Equality protest, organized by students! pic.twitter.com/BkczmLrTzB

With five of the teen organizers in the front (the sixth, Mikayla, stayed at their headquarters, "making sure everyone was safe, watching the news, answering texts"), the march lasted for more than five hours. It remained completely peaceful. Throughout the day, the crowd spoke the names of several Black men and women killed by police in recent years.

The chants began spontaneously, recalls Kennedy. "We started marching and someone said, 'Say his name: George Floyd.' And in that moment, I heard 10,000 people chanting 'George Floyd.'"

At one point, Zee took the microphone and addressed the crowd. "As teens, we are desensitized because we videos of Black people being killed in broad daylight circulating on social media," she said. "As teens, we feel like we cannot make a difference in this world, but we must."

my 15 year old sister and her friends organized a protest in nashville with over 10,000 people!! WE ARE THE FUTURE!!!!! #BlackLivesMatter #NashvilleProtest #teens4equality pic.twitter.com/JmRql4YIXx

The girls share that using your voice is the best tool for creating change, whether it means joining a march, encouraging others to sign a petition or organizing an event in your neighborhood.

Since the protest, the group has seen the direct effects their efforts have made on the community—including new policies (Nashville Mayor John Cooper announced that police officers will begin wearing body cameras) and personnel changes (police chief Steve Anderson is retiring).

"Nashville has definitely come closer since the protest," says Zee. "There's been a lot more unity around neighborhoods."

photo credits: @lukewillcreate this. this is amazing. It’s inspiring. We thank and praise everyone who showed up today. what does unity look like? this is what unity looks like. change is coming. we see it we feel it, we know it. A new revolution is on the way. The world of racism, police brutality, and ignorance is ending, and a new world is blossoming. Except this one looks different..... no justice, NO PEACE! No racist, POLICE! ALSO to everyone asking this is not the end. Stay tuned for more news, stuff is on the way ✊🏻✊🏼✊🏽✊🏾✊🏿

The girls hope that by speaking up, they'll educate others who may otherwise ignore racial injustice—and motivate those who don't understand the need for it because they haven't experienced or witnessed racism firsthand.

Zee adds that, "In the Pledge of Allegiance, it says liberty and just for all. But that's never happened in America. There hasn't been liberty and justice everyone who lives here."

"It doesn't matter who you are or how old you are. Use your voice to bring awareness," says Nya. "If we don't speak up, nothing is going to change."

Teens really do have the potential for change-making. Here's how to get involved with educating, organizing and revolutionizing yourself—and your hometown.

How much time are you dedicating to the fight for racial justice? Whether you have 10, 25 or 45 minutes a day, explore the books, movies, podcasts and email templates compiled and scheduled by Justice in June (justiceinjune.org) so you can take action and make anti-racism work a personal priority.

Listen to podcasts, including NPR's Code Switch, The New York Times' 1619 and Momentum: A Race Forward Podcast, that investigate race, privilege and activism in the past and present. Keep your social media active, too, and follow Black anti-racist educators like Rachel Cargle (@rachel.cargle) and Layla F. Saad (@laylafsaad) who have dedicated their lives to this work.

Do not forget her. Do not let her turn into “another hashtag”. She is not a hashtag she is a human being. She is beautiful and deserves justice and peace. But no justice no peace. And we will keep disrupting the peace until their is justice ✊🏼✊🏽✊🏾✊🏿 #blacklivesmatter

Sign petitions to demand justice for victims of police brutality. Donate what you can to grassroots organizations dedicated to progress for Black individuals. And offer support to those who are taking on immense amounts of emotional labor to fight for Black lives.

GET OUT AND SPEAK OUT.

Reach out to organizers in your community to volunteer your help. Be ready to take on any role needed to support effective protests and rallies. Learn how to protest safely and encourage your friends, family and followers to march by your side in the pursuit of justice and equal rights.

Most importantly, listen to Black people in your community who are leading the movement to protect and uplift Black lives. Centering Black voices creates meaningful progress—both in the Black Lives Matter movement and in the bigger picture of racial equality.

Hey, girl! Just wanted to let you know that this story originally ran in our August/September 2020 issue. Want more? Read the print mag for free *today* when you click HERE.