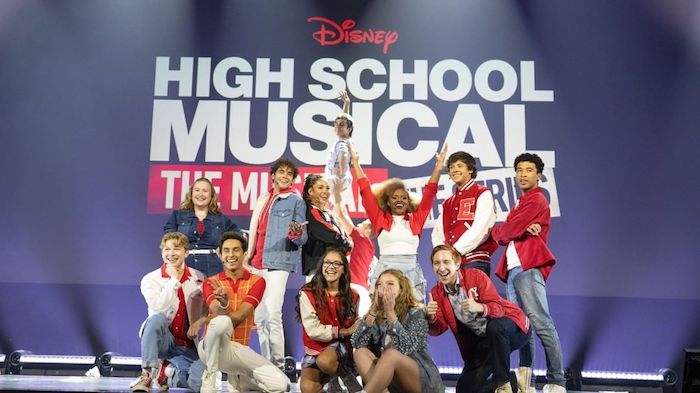 High School Musical: The Musical: The Series is officially coming back for season four, and Disney just dropped some *major* info on what the Wildcats might be up to during the next school year.

The students of East High will be putting on a production of High School Musical 3: Senior Year, and if it's anything like the 2008 film, it is sure to be a night to remember. But there's a twist: At the same time that they're rehearsing HSM 3, the students find out that Disney is filming a High School Musical 4: The Reunion on location at their school.

But what does this mean? For one, it was announced that the Wildcats will be playing extras in the movie. Will we also see members of the OG High School Musical cast make an appearance?

Disney hasn't confirmed any special appearances yet, but we can only hope for some nostalgic cameos. Original stars Lucas Grabeel (Ryan Evans), Corbin Bleu (Chad Danforth) and KayCee Stroh (Martha Chox) have already reprised their roles—and we can only hope to see more of our faves return for season four.

Vanessa Hudgens posted a video in front of East High back in June, possibly signaling her return.

Zac Efron also posed for a photo in front of the school and shared it on Instagram in July.

Hopefully these rumors aren't too good to be true—but either way, we are *so* excited for this upcoming season.

Filming is set to begin later this month in Salt Lake City, and it seems like most of the series regulars will be back for the fourth installment (cast members Joshua Bassett, Sofia Wylie, Matt Cornett, Dara Reneé and Frankie Rodriguez were just a few of the season three actors at the official D23 announcement).

Disney hasn't yet confirmed a release date for the new eps, but we have a feeling that season four will be *super* special. And luckily, we have more episodes of season three to look forward to while we wait for more news!

What type of sweater are you sporting this winter?