Can’t wait for season two of High School Musical: The Musical: The Series? We feel the same way. Luckily, fans have a new reason to celebrate: the Disney+ original is getting a holiday special this month. The very merry episode promises plenty of heartwarming moments, according to actress and model Sofia Wylie.

“When I got to see the holiday special, I literally cried,” Wylie shared with Girls’ Life. “The whole thing is so, so amazing, because it shows off the whole cast's talents and their full uniqueness.”

The set of the special was closer to a desert than a winter wonderland, since it's set in Salt Lake City, Utah. Wylie, who was born and raised in sunny Arizona, felt right at home. “Arizona is so different from what you traditionally see for Christmas, but I absolutely love it there,” she said. 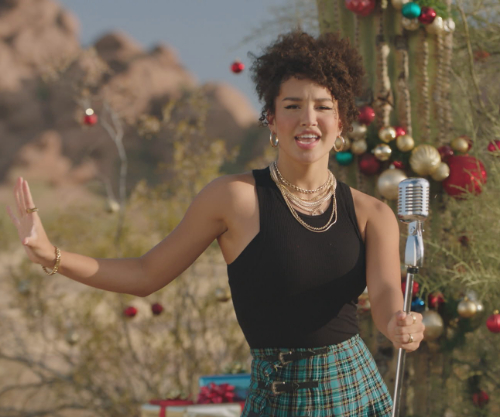 You might recognize Wylie from her time as Buffy Driscoll on Andi Mack. In HSMTMTS, she plays transfer student and musical prodigy Gina Porter, who spent season one trying to scheme her way into the lead role of Gabriella in East High’s performance of the titular musical.

The upcoming special gives her character a new chance to shine via an *amaze* solo performance of Donny Hathaway’s jazzy song “This Christmas”.

“It's a really upbeat song, and I get to dance a bit,” she told GL. “I even did some freestyle, which was fun. I just had a blast.”

And if Christmas isn’t quite your thing, no worries. Wylie promises that with so many different characters and songs to relate to, the special has something for everyone to enjoy.

Don’t just take her word for it—check out the trailer below to hear what the rest of the cast has to say about the holiday episode. There’s even a snippet of the original song, “The Perfect Gift”, written and performed by castmate Joshua Bassett.

Of course, we had to ask what fans can expect to see from the Wildcats in season two of HSMTMTS. Speaking about her character, Wylie said we’ll get to know a new side of Gina.

“In season one, we met her as this facade that she had put on, and now I think we're really getting to see all that's underneath that tough girl exterior,” she said. She also teased “a lot of fun new relationships” as the second season follows the theater department’s production of Beauty And The Beast.

The HSMTMTS holiday special will be available to stream on Disney+ starting December 11, though you can start (or rewatch) season one here. Plus, keep up with Sofia Wylie on Instagram @sofiawylie.