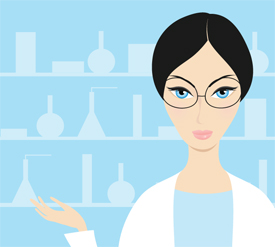 As teens, you take tonsa tests. Math tests, the SATs, tests to get your driver’s license. But researchers, and ‘rents, are debating dolin’ out another kind of test.

The Washington Post reported that there’s been a major increase in the number of women who are gettin’ tests to see if they have a specific genetic mutation—one that can lead to breast cancer. If women know they’re more likely to get cancer, they may alter their lifestyle (and, say, quit smoking). Now, the debate has turned to girls. Families and docs are tryin’ to figure out if it makes sense to screen teen girls for the genetic mutation.

But teen girls rarely get breast cancer, and testing may lead to years and years of extra worrying. Some younger women who have taken the test, and discovered they had the mutation, were considering major, life-altering decisions (like removing their breasts) before they were even 20 years old. Clearly, finding out ya may have cancer down the road would be majorly upsetting.


So, here’s the question. Would you wanna know if you had a gene that made you more likely to get breast or ovarian cancer? Do you think testing for the gene makes sense in younger girls. Or should you just live your life and see what happens?