This kid dabbed during the *worst* moment...ever 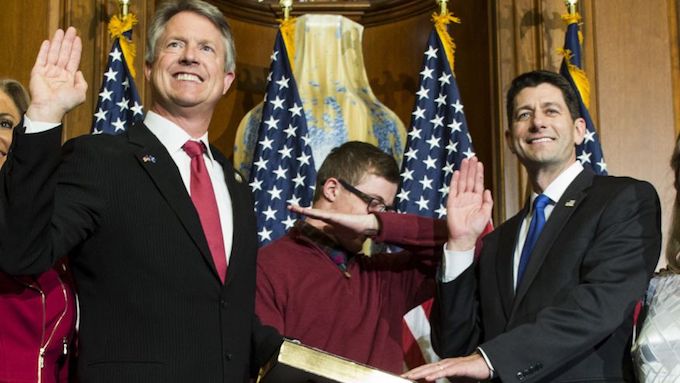 Note to self: Do not dab while your dad is getting sworn-in by Congress.

That is exactly what Cal, son of new Kansas Congressman Roger Marshall, did at the ceremony on Tuesday during a photo-op commemorating the event. Unfortunately, it seems that no one—besides Cal—knew what what dabbing was.

According to Fox News, House Speaker Paul Ryan was the first to call out Cal on his prank asking, “Are you alright? Were you going to sneeze?" Congressman Marshall tried to cover for his son by replying, “He was just sneezing.” Perhaps he was in on the prank? Or maybe he doesn’t really understand the dab either. Either way, it was hilarious.

The teen eventually put his arm down, but not before photographers were able to capture the epic picture. After proceeding to take a few more photos sans dabbing, Cal laughed as Speaker Ryan patted him on the back. He reassured the teen by saying, “Don’t worry about it," but still seemed to be pretty confused by the move and later tweeted, “Still don’t get what dabbing is."

It doesn’t seem like it was all fun and games though. Later Tuesday, Congressman Marshall tweeted, “Just so you know @SpeakerRyan: He’s grounded.”

What do you think of this prank? Let us know in the comments!