This girl's amazing catch is blowing up in the MLB 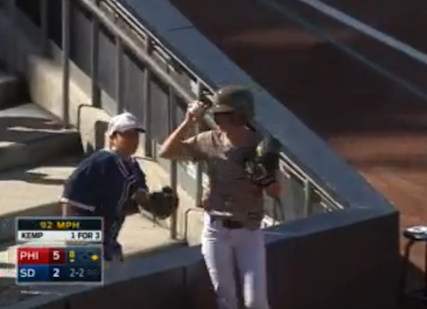 Hey, batter batter! Looks like the MLB just found its newest player when this girl made a catch that was beyond amazing.

Though the San Diego Padres have been on a bit of a losing streak, one jumbotron-worthy moment was enough to make everyone in the stadium stand up and cheer. Only, the catch of the game didn’t come from one of the players in the starting line-up.

Instead, it was the teen ball girl who stole the show with her crazy cool jump ‘n' twist catch that lead to a standing ovation. As the foul ball was driving full-speed ahead down the third base line, the ball girl wasn’t fazed like the crowd. She was 100 percent ready for action—and her quick reflexes and swift glove action speaking for themselves.

The still-unidentified ball girl completely crushed it with a beautiful catch that blew up the ESPN newsfeed—and won her the Play of the Game, despite not officially playing. After laughing off the catch as if it was seriously NBD, she graciously tossed the ball to one of the fans in the stands and continued doing what she does best: being the greatest faux outfielder and ball girl she can be.

Check out the full video clip below and see how this girl totally kicked the boys’ butts.

When have you surprised people with your low-key awesome skills? Show off in the comments below.

POSTED IN sports, In the News