The NFL has officially hired its first female coach 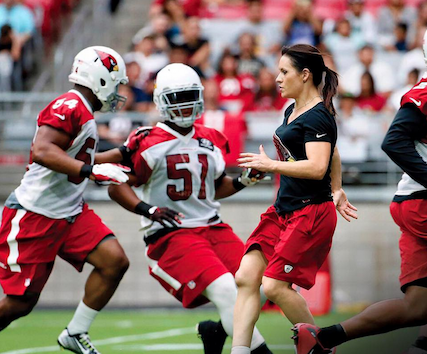 We've always known that girls can do anything boys can, but unfortunately we don't always get the chance to show it. In fact, when NFL head coach for the Arizona Cardinals was asked back in March when the organization would start hiring women coaches, he answered, "The minute they can prove they can make a player better, they'll be hired." Well, it looks like one woman is getting her opportunity to prove she's just as good as the men.

Just last week, the Cardinals hired Women's World Championship winner and sports psychologist Dr. Jen Welter as an assistant coaching intern to work with the linebackers on the team according to ESPN. She'll be helping out during training camps and preseason prep, making her the first female to coach in any capacity for an NFL team. But this isn't the first time she's broken down barriers. Jen was also the first woman to coach in a men's professional football league (the Champions Indoor Football league) and the first woman to play in a men's professional football league as a position other than a kicker (she played runningback for the CIF's Texas Revolution).

We're so excited to see awesome women like Jen making history, and we can't wait to see how she does on the field. Who knows—maybe she'll even pave the way for the first female head coach in the NFL.

When have you proven in your own life that you can do anything that boys can?

POSTED IN sports, football, In the News