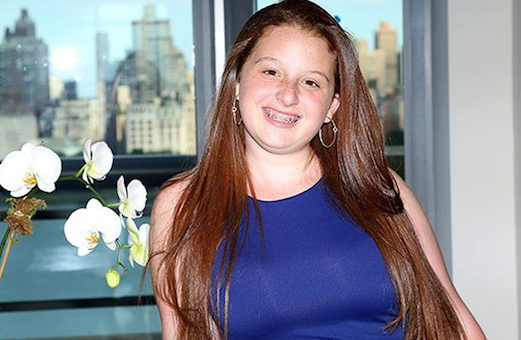 Who said babysitting was just a summer job? For Noa Mintz, it's more like a career than a part-time gig––after all, at just 15-years-old Noa is already making more than $480,000 a year (we're not kidding). Instead of sticking to the usual $5/hour arrangement, Noa kicked her babysitting up a level and started her own company called Nannies by Noa. After three years, Noa's got a total of 190 clients, 50 babysitters and 25 full-time nannies. Talk about a babysitter's club.

Noa came up with the idea for her own agency after reflecting on how a series of babysitters left her feeling totally bored. "For what you're paying, your kids should be more stimulated," she said. Babysitters are meant to watch kids, sure, but also to keep them entertained and having fun. Even when she was seven Noa knew something didn't add up, and remembers telling her mum, "You need to get more bang for your buck." With a good idea and the motivation to get it started, Noa took on the job herself.

Now, Nannies by Noa is so big that Noa and her father had to hire a chief executive to handle the day to day business during school day hours. The new CEO Allison Johnson isn't too much older herself at only 26 and was originally applying for a regular nanny position. Allison said working for a fifteen year old was a little weird at first, but she came around. "I'm a feminist, and I really support women who do things for themselves and get their vision out there."

We love how Noa took the initiative to start her own company and make it happen. It just goes to show that you're never too young to start rocking your dreams.

Are you totally impressed by Noa's business? What kind of business would you start? Let us know in the comments.

POSTED IN In the mag