It’s down to the top 10 designers! Did you tune into last night’s blue-tastic extravaganza?

With another boy booted from the show, cutie-patootie Logan packs up and moves in with his new roomies. After he gets acquainted and works out shower scheds and cuddles, it’s off to meet Heidi.

Heidi meets the remaining 10 on the runway. The mystery clue for the week: “quite colorful.” Luckily designers did not need to travel far as Tim was waiting in the workroom to shell out the rest of the deets.

With a Macy’s (overly enthusiastic) big-wig by his side, the challenge is revealed: Design two looks that are head-to-toe blue for Macy’s Inc. brand. The contestants will be working in teams of two and the winner of this challenge will get to design a holiday dress for Macy’s.

After 15 minutes of sketching, followed by awkward pitches, the team captains are Althea, Christopher, Louise, Irina and Carol Hannah. There will be no immunity for this challenge.

And they’re off to Mood with 20 minutes on the clock and a Benjamin in their pocket. In the grab-everything-blue frenzy, one of last week’s bottom two designers Louise loses her money. But no worries, she eventually finds it underneath some trimmings.


In the workroom: After his previous team challenge nightmare with Qristyl, Epperson chats it out with Christopher hoping to avoid previous mistakes. And luckily for the duo, they’ve magically fallen in love. But unfortunately team Louise and Nicolas don’t seem to be the perfect pairing as Nicolas thinks her designs, particularly the ruffles, are less than flattering. We also find out that Louise, under stress, makes lots o’ odd bird noises and flaps her arms (something she learned from her 25 pets). Eek! 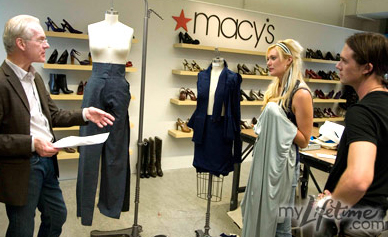 Tim checks in: Tim thinks Louise’s choice of contrast in colors is “abrupt,” finds out that Irina and Jordana are butting heads and has a “conundrum” with C and Epps textiles. But alas, in true Tim fashion, has faith in all of them. Tear!

As the designer top off the finishing touches, Logan seems to have some sewing machine probs. Apparently it’s the one thing on PR that doesn’t seem to have the hots for him. 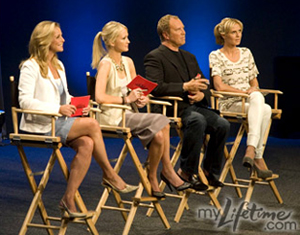 Welcome to the runway!


On the judges’ panel this week are Zana Roberts, Macy’s big-wig, Michael Kors and of course, Heidi! But before it’s lights, camera, action, Heidi drops the bomb that one or more designers could be out! 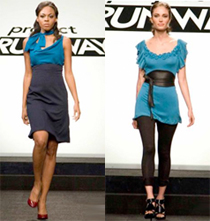 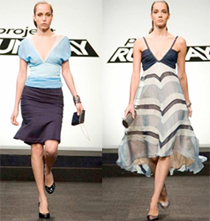 (Left to Right: Carol Hannah/Shirin and Irina/Jordana)
The top two teams are Carol Hannah and Shirin, and Irina and Jordana. All the judges loved CH’s tunic top and admired the neckline. And although I’m not blown away by their outfits (kinda blah), the neckline is pretty. After the judges’ praised Irina’s gorgeous dress, and Jordana and Irina bickered a bit, Irina is named the challenge winner. I have to agree. I sorta dislike the top Jordana made, but the little number whipped up by Irina was def the most fab of all the runway flunkers. 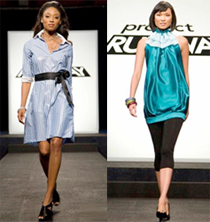 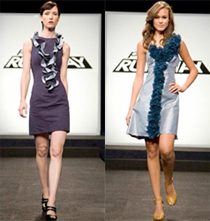 (Left to Right: Christopher/Epperson and Louise/Nicolas)
The bottom two teams this week are Christopher (to his shock, I might add) and Epp, joined by Louise and Nicolas. Heidi thought Chris’ second look had a lobster bib look-alike attached, and Michael Kors chimed in with something about a teal charmeuse disco pumpkin. (Ahh, the wonderful world of similes.) But the shocker for me was Chris’ waterworks festival. Who knew the little guy was so sensitive?

But who got the boot? After producing a “bridal dress with shower puffs” and a dramatic pause accompanied by odd drumming, Louise was sent flying, er, packing. I so wish Louise left last week instead of Ra’mon. What do you think? Do you think Christopher should have gone home instead? What were your fave looks?

Next week, we have new models and more similes! Tune in at the usual 10 PM (EST) on Lifetime.