Project Runway: The world in black and white 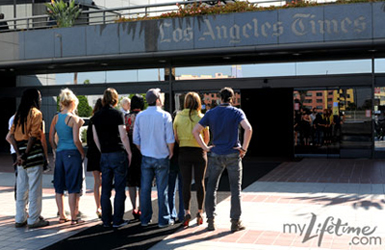 It’s week five in sunny L.A., but which remaining designers will make the cut?

This week’s episode kicked off with a tip from Heidi directing designers to meet Tim at a surprise location where all their answers would be in “black and white.” Cryptic much? Some initially thought the theme would be old Hollywood movies, but after finding themselves at the doors of the Los Angeles Times realized it wouldn’t be that easy.

Newspapers might be “out” these days, but it was definitely “in” last night. Fashion is news, and this week the designers were asked to create a look with newspaper. With only clips from the L.A. Times’ and other tools, like tape, glue, markers, etc., the remaining 12 grabbed as much as they could and headed back to the workroom.

While the challenge was not the most eco-friendly, it definitely tested the creativity of the designers. Ra’mon was immediately inspired by a strip of color, whereas Christopher imagined a fitted bodice that would flow out into a feather of paper sheets. Like clever challenges from past seasons (who could forget the fresh produce masterpieces), it had me on pins and needles whether final products would keep together on the runway (paper isn’t the most durable).

With every inching week, the antics of some designers are starting to wear on others. Some point out Shirin’s chattiness and sense of immaturity, but, hands down, many shared their annoyance with Johnny’s lack of passion and the little time he puts into his creations.

As Tim came into assess the progress of the designers, it seemed like he was pleasantly surprised by what he saw, as the outfits didn’t seem as disastrous as weeks past. After giving a mini history lesson on the emergence of paper fashion, our favorite mentor noted his contentment with Gordana’s “stunning” dress, which didn’t even look like it was made of paper, as well as Irina’s vintage-inspired trench coat.

Nicolas’ try at a ‘90s punk-rock look was feared to be too “costume-y” by Tim. And Johnny’s origami-inspired piece was compared to a kindergarten craft project. Ouchie! Johnny, of course, didn’t take that very well and ditched the design, recreating something equally as messy. He blamed the demise on a leak from the steamer—a fib none of the designers believed. 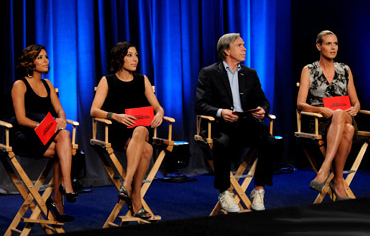 All-American Tommy Hilfiger stepped up to fill Michael Kors’ shoes this week, along with Marie Claire’s Zoe Glassner for Nina Garcia. But all eyes were definitely on the guest judge—the always glam, Eva Longoria Parker. 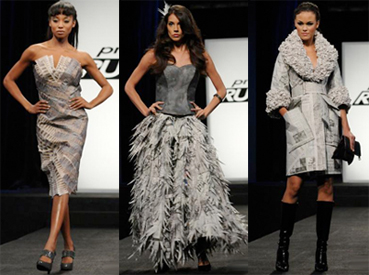 (Left to Right: Althea, Christopher and Irina)
So which three made it to the top? Tommy Hilfiger thought Althea’s dress (inspired by a building) was “genius” with great execution. Christopher’s superb armor-like bodice with flowing skirt received a lot of praise, too. It truly looked like art on the runway and I particularly liked how he added a softness to paper (who knew newspaper could look like feathers?!). While my vote for winning was on him, it was Irina’s trench that took the cake for its originality. She definitely made paper the “new fur” with her meticulous collar and cuff. 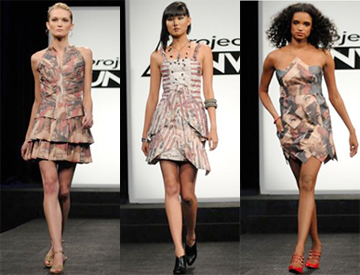 It was a tough call between the bottom three. Gordana’s dress, while I didn’t particularly mind it, was thought to be a tad boring by Heidi. Nicolas failed to impress the judges yet again with his design, making them think roaches in NYC instead of the underground Village clubbing scene he was inspired by. But it was Johnny whose excuses seemed to have run out—even his final blab to the judges about how his initial piece was like “Dior” couldn’t save him. Maybe he should’ve spent more time working on a clever creation than playing the crossword puzzle? Just a thought!

And so the remaining 11 push on. Who will be out next? Tune in to see.

Do you think Johnny deserved to go? Are you happy with Irina’s piece? Blog about it, fashionistas.