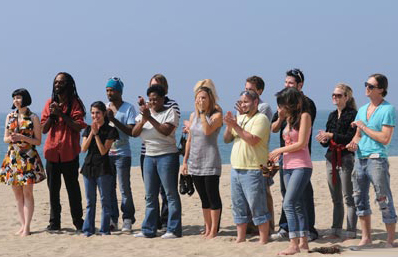 It’s week three of PR! Did you tune in to watch?

Heidi met the designers at the usual PR runway with the deets to this week’s challenge. Our clue for what’s in store? “You can’t leave California without seeing this spot.” Can’t they just leave a card with where to meet? I mean…it just seems more efficient. 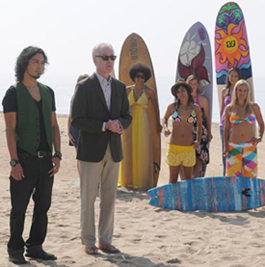 Designers pack into the van in search of their destination. And where do they arrive? At the beach, of course! So yeah…we all saw that one coming. But did you imagine Tim in flips and shades to greet? A-dorably awkward.

Challenge: Designers must work in pairs to create a fun and fashionable surfwear look.

After meeting their mates and chitty-chatty with real surfer girls to draw inspiration, it was off to Mood. With only 15 minutes to shop, designers scramble to get fabric. Some teams clash heads with their differences in taste and others just run amok trying to get all their necessities in time.

Back at the workroom things start to heat up: Epperson takes charge and bumps Qristyl’s leadership to the sidelines, ‘cause her taste and fabric choices don’t meet his standards. Ra’mon also takes charge in his duo with Mitchell. But unlike Epp’s high-horse ‘tude, Ra’mon’s forced to take the reigns as Mitchell seems unable and/or unwilling to design, sew or pretty much do anything!

Three hours until the end of the first day, Tim stops by to raise the stakes. Designers must now create a second avant-garde look to accompany their surfwear. Luckily a rep from each team will be able to shop ‘til they drop at Mood for more fab fabric and a budget of 200 smack-a-roos.

It’s day two and we get a glimpse of what’s in store for the runway: Ra’mon draws inspiration for his avant-garde look from a…wet suit?! After Tim’s horrified reaction to his superhero piece, Ra’mon scraps his ideas and tries his hand at some Neoprene. Thanks goodness! Nick, aka Mr. Ombre of Macramé, has an avant-garde piece that frankly looks more scary lingerie than high-end. And Qristyl and Epp still seem to be bickering every step of the way. Eek.

Tim, always the bearer of bad news, tells Carol Hannah that her ambitious model has scored a commercial opp and will not be there for the fitting. With very little hesitation, CH decides to swap her girl for Valerie, who was previously eliminated from the show. Who’s a lucky model?

The morning of the runway show, Nick jokes that Mitchell will be in the bottom three, again. Ever heard of karma, Nick? Most designers are frantic to finish off their final touches, but poor Ra’mon looks worn out. Starting a new avant-garde piece so late in the challenge, he’s still hand dyeing his garment to take the “lettuce” look to high-fashion 35 minutes before show time. Where is Mitchell? 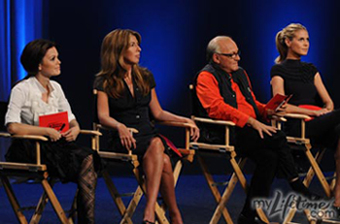 Off to the Runway! 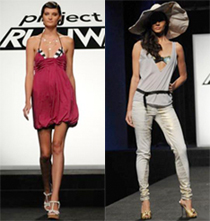 (Left to Right: Althea and Christoper)

I wasn’t blown away by many of the looks this week, but I still of course had a few of my faves that didn’t make it into the top two. Althea’s bubble dress wasn’t exactly the newest idea on the block, the black and white stripe peeping through was the cutest thing ever! Shirin’s dress to bathing suit was so tribal chic and don’t judge, but I LOVED Chris’ gold pants. 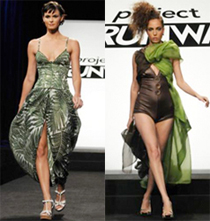 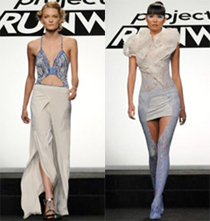 (Left to Right: Qristyl and Epperson, Nick and Jordana)

Qristyl and Epperson, and Nick and Jordana were dubbed the bottom two. And while we leave Q and E STILL furiously fighting on the runway, let’s talk about Nick’s pieces. The judges liked the macramé top on his surfwear number, but found the pant/sarong thingamajig confusing. But who can focus on his surfer look when his avant-garde piece is standing nearby? O.M.G. 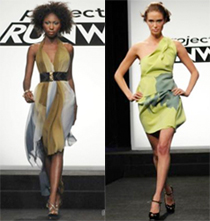 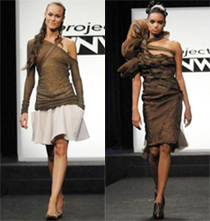 (Left to Right: Ra'mon and Mitchell, Johnny and Irina)
The leading looks this week were from Ra’mon and Mitchell, and Johnny and Irina. I agreed with the judges that Johnny’s surf-inspired look was wearable and cute, but I personally thought Ra’mon’s avant-garde dress took the cake in all four looks. And the judges must have agreed because Ra’mon, and ONLY Ra’mon, was named the winner of this challenge.

After talking with Mitchell, the judges quickly found out (through his own admission, no less!) that Ra’mon did most of the work while he allocated his time working on a mysterious bathing suit that viewers didn’t even get a chance to see. Hearing this, judges were obvi baffled and for the first time in PR history, a winning teammate was sent home packing.

Did you agree with the judges? Should Qristyl have gone home instead? Who were your fave looks from this week?

‘Til next week, stay fashionably fab!