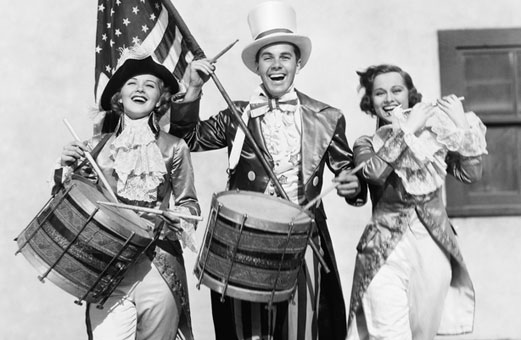 When the word “history” comes to mind, you probably think of dusty antiques and boring lectures on dead guys. But there are tons of nifty facts about our country that ya might actually wanna know, so here are a few that you can use to impress your fam while you’re celebrating America’s birthday this year.

Nicknames for That Big White House

Before 1901, the White House was fondly known as “The President’s Palace,” just “The President’s House,” or “The Executive Mansion.” It took us 26 presidents to settle on a name, and you can thank Theodore Roosevelt for finally making that exec decision.

Most people assume that the Declaration of Independence was all signed and ready to go on July 4th, 1776, but the truth is that the main signing action took place on August 2nd of that year. And even then, some congressmen didn’t sign it ‘til later, and others never signed at all.

A Lack of Law in the Supreme Court

The funny thing about our Constitution is that it has some gaps in it. For example, Supreme Court Justices have no real requirements for age, education, or even citizenship. They don’t have to have gone to law school. Check out James Byrnes, a Justice from the 1940s—he didn’t even finish high school.

During his presidency, Franklin D. Roosevelt got around in a black Lincoln convertible with steel armor plating. It was the first presidential vehicle to be decked out Secret Service-style, and its nickname was the “Sunshine Special.” Another cool set of wheels owned by President Roosevelt was an armored Cadillac that once belonged to the gangster Al Capone.

Let There Be Light

New York City was among the first three cities in the world to sport electric lights. The other two were Paris, France, and San Jose, Costa Rica.

In the 1700s, lots of people were afraid that they might get buried alive by accident because medicine back then wasn’t advanced enough to know for sure that someone was dead. George Washington shared this fear, so with one of his dying breaths, he instructed his subordinates not to bury him until he had been “dead” for three days.

In order to postpone (and possibly stop) the movement of the 1957 Civil Rights Act through the Senate, Senator Strom Thurmond spoke for 24 hours and 18 minutes in what’s called a “filibuster.” He also ended up being the longest-serving senator in history and lived to be 100 years old. Talk about not giving up.

Everybody uses “okay,” even in foreign countries. But did you know that the expression originated right here in the United States? When Martin Van Buren was trying to get elected President, people made O.K. clubs to show their support of him. O.K. stood for “Old Kinderhook,” which was his hometown in New York. And evidently, those clubs worked as a campaign strategy because he ended up becoming our eighth president.

So babes, who’s been paying attention in history class? Do you have a fun fact about our lovely country that ya wanna share?

» A million ways to make this weekend rock