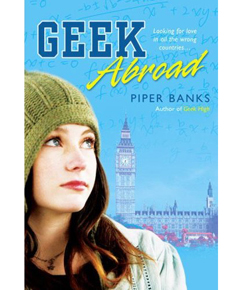 Geek High is back and so is the beloved human calculator, Miranda!  Piper Banks first brought you Geek High and now she has brought you back to the events of Notting Hill Independent School with Geek Abroad. If you haven’t read the first, have no fear, you will fall into Miranda Bloom’s series of teenage escapades easily.

Miranda seems to have finally found the boy of her dreams and has attained “quasi-almost-boyfriend” status with Dex McConnell, a lacrosse star at nearby Orange Cove High. But after sharing an earth-shattering kiss with the dreamy Dex, Miranda takes off to London for the Christmas holiday to visit her flaky mother, Sadie. Entering a seemingly new world and leaving behind a fresh romance, Miranda is plagued with doubts about whether she and Dex are an item or whether she was simply the recipient of a pity kiss.

Each day of her trip, Miranda hopes Dex will send her an e-mail proclaiming his love for her, or at least acknowledge her existence.  Sadie, in the meantime, plays matchmaker and tries to arrange for the dashing, and very English, Henry to take Miranda around London.  Miranda is privy to her mother’s motivations, but allows Henry to play tour guide. Henry and Miranda hit it off, and now she has to decide if the American boy she left behind is a boyfriend or a two-timing jerk and if there is room for some fish and chips (and Henry!) in her life.

When Miranda returns home from her holiday, things aren’t any clearer with Dex or with Henry.  Life gets more difficult as Miranda’s evil stepmother, Peyton, goes out of her way to make Miranda feel like an intruder in her own family.  Miranda’s longtime Geek High friends aren’t getting along, and her dear friend Charlie would rather suck face with her new boyfriend than acknowledge the existence of school, friends or air.

Even though Miranda is a math genius, she is a girl we can all relate to.  She feels awkward and self-conscious, but at the same time realizes the kind of person she is and wants to be. And you won’t be able to help but be happy that some of the things that happen to her are not happening to you…

With her uncanny number of activities and the amount of stress in her young life, can she juggle her dreams of being a writer and rise above a quasi-almost relationship?

She is no ordinary teenager, but then again, who is?