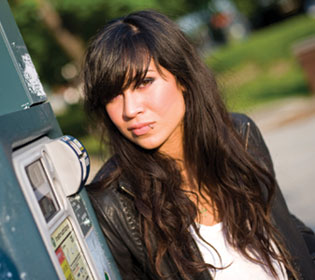 You may recognize Cassie Steele as a star of the popular TV show Degrassi: Next Generation. But the 19-year old Canadian actress, who plays Manny Santos on the program, isn’t settling for the acting success she’s found on Degrassi. Instead, she’s on her way to adding “accomplished music artist” to her resume. Cassie has already toured around Canada twice, and is settling in Los Angeles to focus on her music career.
Tuning into Cassie’s album Destructo Doll (available now) will instantly channel the classic rock chick in you. Citing guitar god Jimi Hendrix and rock legend Bob Dylan as influences, Cassie isn’t following in the bubble-gum footsteps of other television actresses-turned-singers. We absolutely love Cassie’s soulful vocal performances; her voice is one of a confident female lead singer of a kickin’ rock band.
“Mr. Colson” is a feisty rocker that proves that Cassie stays true to classic rock ‘n’ roll. The bluesy “Hollywood” shows off the singer’s strong vocal talent in a groovy, melodic guitar-laced track. She also releases her laid back side on the smooth “Summer Nights.” The album’s lyrics are honest and blunt, and it’s apparent that Cassie has nothing to hold back.
WATCH NOW!
Grab a look at Cassie’s “Mr. Colson” music video.

Cassie isn’t deserting the Degrassi crew, though! Be sure to catch her and the rest of the gang with the two hour TV movie Degrassi Goes Hollywood, premieres this Friday, August 14 on The N.
Do you dig Cassie’s music? Or would you rather just watch her on Degrassi? Blog it out, babes!

POSTED IN music, Degrassi, watch this