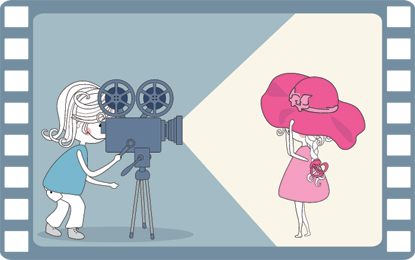 My little sister Emily and I proudly admit that we are complete dorks. We’ve always been pretty tight, and ever since we were little girls, we would make home videos doing the most random and goofiest things.
And—move over Miley and Mandy—we even produced our own “Haley and Emily Show” right from our basement, with our friends and family as the audience. Our videos were filled with anything from The Amazing Race parodies to something as simple and classic as the two of us sneaking up behind our older brother and making ridiculous faces.
In order to make our videos, we had to hijack the family camera and rewind the tape to record over any mistakes we made. Our primitive shots had the production value of, well, two elementary school girls trying to make a video, which is what they were. But the collection of memories that we inadvertently captured made our family die of laughter, even years later.
Our movie making has been on hiatus since high school, but this summer (the first since my freshman year of college), Emmy and I have been bonding over the video bug again. Using her sleek digital camera and Windows Movie Maker (all of you Mac users can use iMovie), it’s way easier to make videos look more professional this time around.
We’ve been doing our own renditions of “I’m On a Boat” when we spent the day on our grandparents’ boat, along with a few other music vids. Emmy even got her friends in on the action when they recorded their own version of All Time Low’s “Weightless.”
The coolest part of making movies is seeing the finished product at the end. Emmy and I still laugh so hard that we double over at the desk of our computer—the very reason we continue to shoot videos.
So the next rainy sunny day, grab your siblings or friends and a digital camera, and start filming! At the very least you’ll come out of it with a couple of hilarious bloopers.
If you could make your own movies, what would they be about? Blog about it, babes.