Chow Down on Cereal 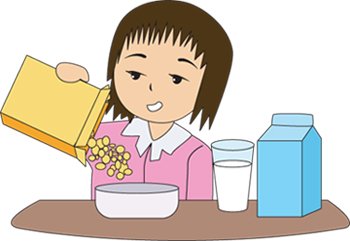 What's the fastest way to down a filling breakfast and still catch the bus? Chowing down a bowl of cereal, hands down. But have you ever thought of what could be behind those deliciously sweet and crunchy bites between milk?

We're guessing you don't think twice about it. We didn't either, until we read in an article from the Washington Post, which reported there are only four out of 27 "kids" cereals are considered to be rated "Very Good." Did your bowl of Honey Bunches of Oats make the cut?

Cheerios, Kix, Honey Nut Cheerios and Life were rated the highest because they are low in sugars, contain fiber and iron and let ya bone up on calcium. Yum! Cereals such as Corn Pops, Honey Smacks and Golden Crisp among others were layin' shamefully low at the bottom of the list. Some had as much sugar as a glazed donut from Dunkin' Donuts. Yikes.

The same study in the article found that out of 91 individuals from ages six to 16, pour about "50 percent to 65 percent more than the suggested serving size." Just as shocking, we read that cereals in the U.S. have more sugar than the SAME EXACT BRAND in other countries.

Next time, pick up a lower-sugar option, like Special K or Grape Nuts. Or even a hot bowl of oatmeal (add blueberries and almonds to give it a sweet antioxidant boost!).