Sexist, much?! This teen was denied entry to homecoming for wearing... 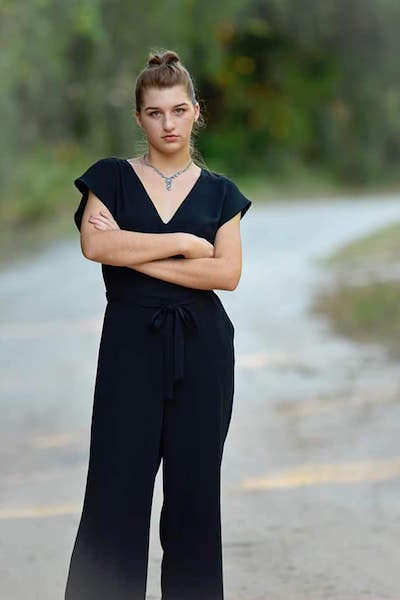 Last week, we here at Girls' Life celebrated two awesome examples of homecoming inclusion, but unfortch, some schools are still living in the Stone Age. You see, when Darcy Krueger, a 17-year-old girl from Tampa, Florida, was about to enter her homecoming dance on Friday, September 27, she was turned away for wearing a jumpsuit.

"I already had this [jumpsuit] in the closet and I was like, 'Hey this could totally work,'" Darcy explained to her local ABC affiliate. Adults at the dance didn't think so, and told her she had to go home to change. An event organizer told ABC that the dress code required "dress pants, button-down shirts and ties" for the guys, and "semi-formal dresses for young ladies."

"I think it's very unfair that boys can wear pants but girls can't," Darcy said. We agree!

Darcy's mother, Melissa Krueger, took to Facebook to air her grievances for her daughter, and hopes that national attention will help to change things. "[Darcy] didn't let this get to her self-worth and her dignity," her mom said.

While Darcy's money was refunded, you can't put a price tag on missing out on what was supposed to be a major milestone. "They did refund the money," Darcy's mother said. "But it's kind of bigger than that for me. It's like an injustice. This is my daughter's senior year and to see her get rejected and denied entrance to a dance that she could have went to any semi-formal event in the area and walked right in and no one would have batted an eye."

Melissa later posted on Facebook that she "still hopes the dress code gets updated."It really should!

Have you ever dealt with a sexist dress code?

We're spreading the love with a fab bunch of GL essentials and you could win them all! Enter to win now through February 29  HERE.