Boys Are No Diff 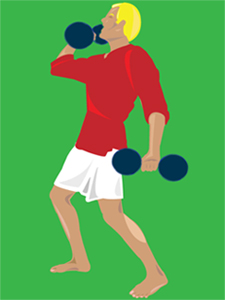 According to an article in the U.S. News and World Report, teen girls are not the only ones who face the pressures of weight and appearance. Some boys go through similar dilemmas, but they may be brought on for diff reasons.

Girls’ whose mom’s had struggled with eating disorders were nearly three times as likely to purge. And some indicators that a girl would suffer from disordered eating were dieting 24/7 and striving to look like celebs. While girls’ actions are based on what we perceive as beautiful, boys feed off of remarks made from family members and friends.

Boys’ whose dads negatively commented on their weight were more likely to binge than their peers with a supportive Pops.

So while it’s way important for you to look to women of all sizes as healthy role models, it’s key for your bro to learn how to roll with the punches if someone pokes fun at him. So try not to tease him…well, at least not about his weight!