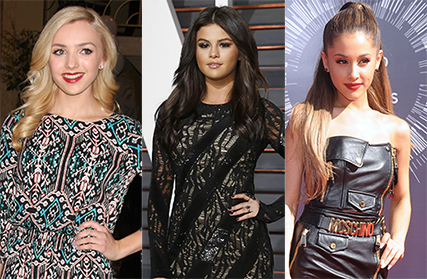 We all know that Zendaya totally ruled the scene this week, but did you know that some of our other fave celebs were up to amazing things as well? There is a lot happening in both the TV and music world and we can’t wait to see how all these amazing projects turn out.

The Show Must Go On

It’s official, Ariana Grande’s first headlining tour, The Honeymoon Tour, kicked off this week in Kansas City – but the show didn’t go as smoothly as planned. Immediately following the show, Ari tweeted out that she "almost died" before going on stage thanks to malfunctioning equipment. Luckily, Ari relied on her quick reflexes and years of experience to kick the show off with a bang. We can’t wait to get more inside info from Ari herself and see more videos of her singing live.

We’ll be the first to admit that when we found out that the fourth season of Jessie would be it’s last, we were devastated. Now that the final episodes are airing, we're cherishing every moment we had with Jessie and the kids, but we know now that even once the show is done we'll have a reason to celebrate. It was confirmed that Peyton List, Skai Jackson and Karan Brar are getting their own spin-off show. Finally we can relax knowing that the Ross kids aren't done getting up to crazy shenanigans!

When the new Dancing with the Stars cast was announced, we were more than excited to see that some of our fave celebs will be competing and stepping way out of their comfort zones. Both Riker Lynch and Willow Smith are GL BFFs and we can’t wait to see their moves on the dance floor. We couldn’t help but "aww" when Rydel Lynch posted a super cute throwback pic in honor of her brother's new gig. Maybe we’ll see her dancing with a pro one day, too.

I Want You To Know

Rumored couple Selena Gomez and Zedd are taking it up a notch after their new song, "I Want You To Know," was finally released. This instant hit features the two doing what they do best, and we hope that this is just the beginning. Sel also Insta'd a pic of her in hair and make-up, promising that a new video is coming soon. We can’t wait to hear more of Selena’s new music – and more about her potential new boyfriend!

The BRIT Awards 2015 featured so many of our fave artists, including Ed Sheeran and Taylor Swift who both put on amazing performances. We love award shows because they bring all the coolest celebs to one place (and red carpet fashion is totally amazing). Seeing Little Mix together again for the first time in what feels like forever made us super excited for the music that they’ve been working so hard on. Although we missed seeing the One Direction boys live, they were still able to accept their award for best music video by thanking the fans digitally.