Austin North spills on tomorrow's I Didn't Do It season premiere 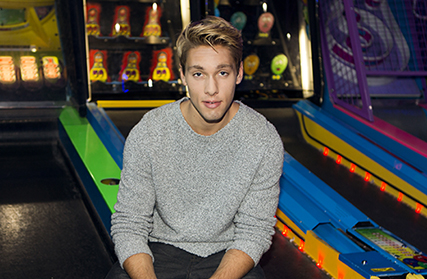 {relative}You know Austin North as cool guy Logan on Disney Channel's I Didn't Do It. Back in season one, we saw him, his twin sister Lindy (Olivia Holt) and their three best friends get into all sorts of wacky shenanigans. Every episode found the gang in a new crazy predicament, and it looks like we're going to get even more LOL-worthy stories out of season two. 18-year-old Austin North talked with us about the season premiere, Logan's new girlfriend and hanging with the gang off set.

GL: What's it like being back on set for season two? Are you glad to see everyone again?

Austin: It's the best, I missed it so much. It's such a great environment to be in. We were on a very long hiatus, but the cast and I all hung out. We never get tired of each other, which is crazy because we’re with each other all the time. We alway eat lunch together on set and turn on a TV show or something. The girls like to watch Princess Diaries and Lizzie McGuire, all those kinds of movies.

GL: Do Olivia, Sarah Gilman and Piper Curda outvote you and Peyton Clark, like what happens with your characters on the show?

Austin: Yeah, they’ll outvote us and we’ll end up watching Princess Protection Program. I'm fine with it, though, I like those movies, and sometimes we'll all go outside and play basketball, too.

GL: So what's going on with Logan in season two?

Austin: He actually gets a girlfriend! She's very similar to him – she’s the type of person that would finish his sentences, so it was really fun to work on.

GL: Does that mean there's no hope for fans who want to see Logan and Jasmine get together?

Austin: Not necessarily. I think it was the Halloween episode last season where we all found out that Jasmine likes Logan, but you do see a little more of that in season two.

GL: You guys have been filming episodes live recently, right? What's that been like?

Austin: It’s a whole new energy to get to perform in front of all of these people. I haven’t really done much theater, so that was kind of a new experience, being in front of everyone. You really have to be on your game, but it was so much fun.

GL: Is there any other type of acting you'd like to try?

Austin: I love action movies and TV shows. 24 is my favorite show of all time. They brought it back last year for a ninth season called 24: Live Another Day, but if they decided to bring it back again that would be my dream role.

GL: Is there any particular episode coming up that you can't wait for fans to see?

Austin: Probably the premiere. Just because it's the first one back, but it's a really solid episode, too. The girls have a slumber party in the show, and Logan and Garrett have their own sleepover where they get trapped in a dog cage for the entire night. It's just really funny.

Are you excited for tomorrow's I Didn't Do It season two premiere? Will you tune in to Disney Channel tomorrow (2/15) at 9:00 p.m. to watch? Let us know in the comments!

POSTED IN Disney, I Didn't Do It, GL Exclusive

What's the best way to study?