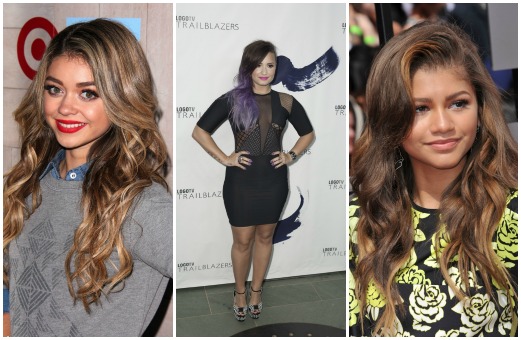 December is right around the corner. How did that happen? We feel like 2014 just started and now there’s only one month left until 2015! We love this time of year, and so do all of our fave celebs. Read on to get the 4-1-1 on who is doing what to prepare for the holidays.

Everyone was buzzing with excitement when Camila Cabella from Fifth Harmony confirmed that she and Austin Mahone were a couple two weeks ago. Apparently the spotlight on their relationship was too much to handle because the couple has reportedly split! When asked about Austin in a radio interview this week, Camila dropped the bomb that the two aren’t together anymore and that it was a recent split. It seems that there is no bad blood between them as the classy gal explained, “things happen.” Who do you think Camila should date next?

Former High School Musical star Ashley Tisdale has been super busy lately with getting married and producing Young& Hungry on ABC Family. It seems like she can do anything—including a return to the music scene. When asked if she was planning a comeback, Ash said “Not right now, but maybe! I never like to say no.” We’re hoping that it’s sooner than later for this starlet!

It seems like there’s nothing Zendaya can’t do. She can dance, sing, act, and now produce! Zendaya not only stars in the new show K.C. Undercover, she is also a co-producer. The show is about a high school math genius, who also doubles as a secret spy agent and Z recently shared the first poster for the new series on her Instagram. The series is set to air in early 2015. Will you be tuning in?

Modern Family star Sarah Hyland just turned 24 and had the most star-studded party of the year. Of course her besties like Taylor Swift, Lorde and Jaime King were in attendance, but there were some other people on her guest list who surprised us. From the tons of pics that flooded our Instagram account, it looks like Ansel Elgoort was there, too. We’re not sure how the two know each other but we do know that they would make the cutest couple. What do you think?

Looks like another Disney friendship has run its course. Demi Lovato revealed this week that her and Miley Cyrus are no longer pals. When a fan asked Demi to describe her current connection to Miley during a radio interview, the singer responded, “Um…yeah…that, um…we're, we're like...we're acquaintances.” She then added, "I don't have anything in common with her anymore. I wish her the best." A source reportedly told E! News that Demi’s sobriety could be the reason behind this, saying, “Miley is a wild card and Demi has made a point of not surrounding herself with people who party too much.” Do you think these two might be able to reconnect in the future?