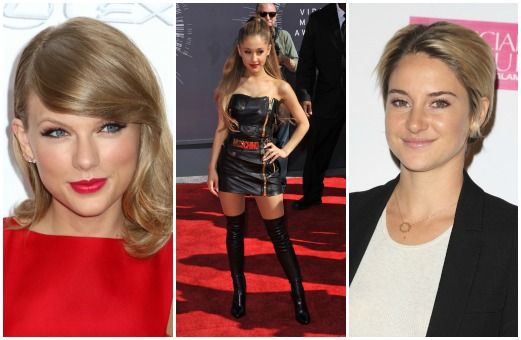 Happy Halloween! You may have been focused on getting your costume ready for tonight, so we’re here to tell you everything you need to know about your fave celebs. What movie finally started filming and what song is on repeat pretty much everywhere in the world? Read on to find out!

Taylor Swift is all we have been able to talk about for the past few weeks and now that her newest album 1989 has released, we can’t stop listening to her! Her first pop-only album is everything we could have ever dreamed of with upbeat tunes and those always loveable ballads. It is predicted that the album will sell over one million copies in the first week! Not only that, but the new New York resident just announced that she’s donating proceeds from her single “Welcome To New York” to New York City Public Schools. Amazing!

Paper Towns is the second John Green novel to be turned into a movie and we couldn’t be more excited. After finding out more about the amazing cast, led by Cara Delevigne and Nat Wolff, we were anxiously awaiting the day filming would start. We’re happy to report that the wait is over! John Green tweeted out tons of BTS shots this week to fans and even Cara Instagramed a pic from the table read. With all the social media these celebs use, it’s going to feel as if we’re right on set with them.

Everyone has been excited about Lorde being the sole creator of the Mockinjay movie soundtrack. But we were surprised to learn this week that a special name is in the credits. Ariana Grande has reportedly collaborated with Diplo and Lorde for a song on the album! We can’t wait to hear what these musical geniuses have come up with and we’re expecting to be listening to it 24/7 when the album drops November 17.

One Direction’s newest music video for their single “Steal My Girl” released earlier this week and Directioners have been hard at work trying to help the boys beat the record for most views in 24 hours. After days of waiting, it was announced that, thanks to the fans, 1D scored that record. Unfortunately, Directioners could only celebrate for a few days before Harry Styles took to Twitter explaining some confusion about the issue. Harry tweeted to his 22.4 million followers, “Just found out we didn't beat the Vevo record. But thank you guys for all your effort, the views were amazing! You're legends .x” That just means these cuties will have to come back even stronger with their next vid.

With Insurgent’s release date of March 20 feeling like light years away, we are finally getting posters that will help with the wait! Since the flick will be shown in some theaters in 3D, interactive 3D posters released this week of some of our fave characters. From a stern looking Caleb to a short-haired Tris, these posters are giving us an inside look of the mega-hit sequel. Now all we have to do is wait for more BTS info.