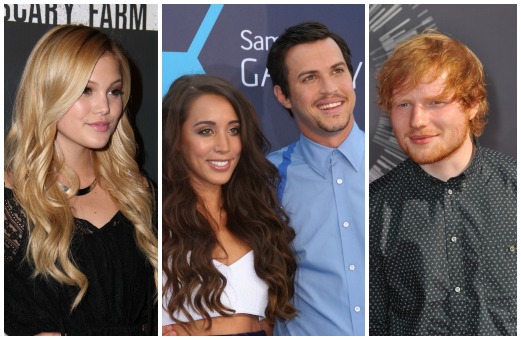 Our fave musical celebs have been busy this week releasing exciting info, and we’re here to give you the 4-1-1 on everything. Who is releasing their first ever single and which stars teamed up to create the perfect music video? Read on to find out!

Is there anything Bethany Mota can’t do? This YouTube star has her own clothing line and fragrance, is becoming the person to beat on Dancing With The Stars and is now releasing her first ever single! The song “Need You Right Now” is set to release next week and we couldn’t be more excited. After hearing her sing every now in then in her vlogs on YouTube, we won’t be surprised if she shoots to musical superstardom in no time.

Actually, it’s all about Alex and Sierra, the cutest couple that took over our hearts and won The X Factor Season 3. This duo has been hard at work putting together their first album, and it’s finally here! Their album It’s About Us released this week and contains their debut single “Scarecrow,” which already has over a million views. We’re already playing their album on repeat and know you will, too.

BBC Music just released a music video that features nearly two dozen musical stars covering the Beach Boys’ “God Only Knows”. Some famous faces that we spy are Pharell, Lorde, Sam Smith and One Direction and all the proceeds of the single will go towards BBC’s Children in Need charity. We love that all these celebs came together for such an awesome cause.

Ed Sheeran wow’d us all with his dancing skills when he released his newest music video for “Thinking Out Loud” this week. The song itself is super cute, but when we saw Ed dancing across the room and holding his own against the professional dancer, we couldn’t help but shed a tear. We love the simplicity of the vid and how it truly conveys the meaning behind the song.

Our February/March 2014 cover girl Olivia Holt made a super exciting announcement this week, saying that she has officially signed with Hollywood Records and will be releasing a debut album in 2015. Olivia has already told us how much she loves singing and proved her skills with her song “Carry On” for the Disney Nature movie Bears earlier this year. We are so excited to hear more original songs from Olivia in the future!