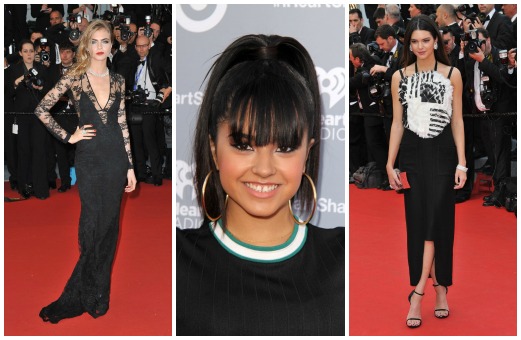 Another week is gone and thankfully that means it’s the weekend! So take a break from stressing about Algebra and catch up on everything you need to know about your fave celebs. Who is making a major career switch and who is packing up to head on tour? Read on to find out!

From Runway to Big Screen

After finding major success with The Fault in Our Stars, another John Green novel is in the works to become a major motion picture! This time, we’ll be seeing Paper Towns come to life and we finally found out who will be playing opposite Nat Wolff. Cara Delevingne, is mostly known for strutting down the runway for the biggest designers. But this week, we learned she’ll be debuting her acting skills as the female lead in this new film. John Green tweeted out that Cara’s, “audition blew everyone away (including me!) and she understands Margo profoundly. I am so excited!” We can’t wait to hear more about this developing movie.

If you didn’t already know, we were able to hang out with Demi Lovato as she kicked off her Demi World Tour in Baltimore, MD not too long ago (check out what happened HERE) . While the tour has been going on for a few weeks, Demi is still able to surprise her Lovatics. This time, it’s by adding our April/May cover girl Becky G. to the setlist! After performing as an opening act in Miami, FL this week, Becky tweeted “Thank you Miami for last night, officially on tour with @ddlovato!” We are pumped to see these girl power icons sing it out on stage together. Our fingers are crossed that there is a collab is in their future.

One of the most beloved movies of our generation is no doubt The Sisterhood of the Traveling Pants. After two super successful flicks in honor of the spectacular book series, we still can’t get enough of the fab four friends. Even though it’s been almost 10 years since the first movie released, the group is still as tight as ever—and they proved it this week by posting a pic together. Seeing the gang together again has sparked even more rumors that a third movie is in the works. Fingers crossed it’s really happening!

Nick Jonas has been making way on the charts and there’s no stopping him. This boy band dropout (ok not really dropout, but you know what we mean) is making a name for himself and we can’t wait to see what else he has up his sleeve for his album. The moment his newest single “Jealous” released, it has been playing on the radio nonstop—and we’re not complaining! The cutie even celebrated his 22nd birthday this week by revealing the full music video for his latest song. Cue the jealousy towards Nick’s real-life GF (and love interest in the music vid), Olivia Culpo.

Kendall Jenner has become a household name and she is taking the fashion world by storm. By watching Keeping Up With The Kardashians, it may seem as if she is living the dream, but there is apparently more than what we see on camera. In fact, Kendall reportedly changed her name to try and show she means business in the fashion world, now legally going by just “Kendall.” Kendall rocked the runway during NYFW, but it wasn’t as spectacular as you would think. It has been reported this week that Kendall was actually bullied by the other models who thought she didn’t deserve to be there. It is evident by Kendall’s hard work that she wasn’t handed her modeling jobs just because of who her family is, but famous or not, why can’t people learn that bullying is never a good thing?