We're H-O-T for The Hunger Games' Alexander Ludwig. Here's why! 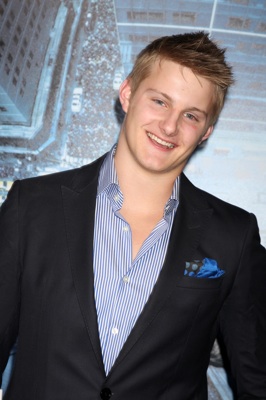 You may remember this 19-year-old cutie from Race to Witch Mountain (ya know, the one with AnnaSophia Robb) and if not, you’ll definitely know of him after you see the movie adaptation of The Hunger Games! Alexander, or “Xander” as his castmates often refer to him, plays Cato, the strong and egotistical tribute from District 2.

But before you go see him in action, fighting for his life in The Hunger Games, there are a few things you need to know about this Canadian cutie. Here they are…

He’s still a kid at heart. The same things that were funny to him as a kid are still funny to him now. “Suddenly, out of nowhere, I cannot name him because he would just be too embarrassed, but this guy just walks up to Jack Quaid, looks him in the eyes, farts and then walks back,” he tells us of an LOL moment on the Hunger Games set. “We all literally just could not stop laughing. Honestly hilarious.”

He’s a bit claustrophobic. “I used to be really scared of elevators or really enclosed rooms. It’s kind of something I’m still a little freaked out about.

He’s a pro skier. “I’ve been skiing since I was 17 months old. I do freestyle and big mountain skiing. They judge you on how fluid your run is, how big the cliff is that you jump and what tricks you do off of them. It gets pretty crazy.”

He has a type when it comes to girls. “I love fun, adventurous girls who are down to try anything like bungee jumping, or try a new sport or go on a hike.”

Something you really wouldn’t expect? “Oh and also, I’m afraid of Cheetos.” Right now you’re probably thinking, “huh?” Well, let him explain…“Because when you’re at parties and people are eating Cheetos. They get in their teeth and it freaks me out. I never eat them at parties.”

Do you think Alexander will be a good Cato? Are you pumped to see him on the big screen? Blog about it, babes.

Want more from Xander? Turn to page 59 of Girls’ Life’s April/May issue for a sweet surprise.

POSTED IN entertainment, movies, movies we love, The Hunger Games, celebrity interviews, Celebs, Alexander Ludwig, In the mag, April May 2012

by Patricia McNamara and Rachael Ellenbogen | 2/1/2016