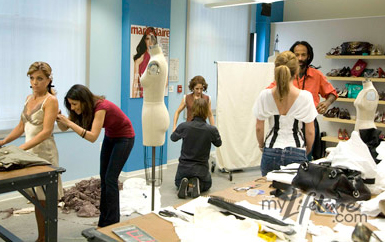 It’s down to the divine nine and, after last week’s nerve-wracking elimination, who knows which designer will be going home next.


As fashion week inches closer and closer, this week’s challenge is the last where immunity is up for grabs.

The Challenge: Convert an old wedding dress into a hip New York look.

As the designers pile around the runway, Heidi announces a little surprise (shocker!)  for this week’s challenge—new models. And instead of the long-legged beauties gracing the runways in weeks past, the new clientele are divorcees who want to let go of the past and start fresh, turning their old wedding dresses into a hip look.

Irina, who won last week, gets first pick and opts for a dress with lots of lace. Logan’s choice also promises to be beneficial as he picks one with tons of material to work. Shirin, on the other hand, has last pick—the simplest dress with the least amount of fabric. 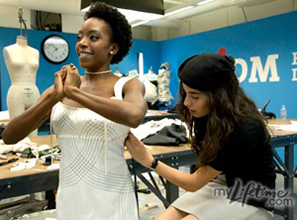 As with any challenge that requires everyday people, the clients tend to be über picky. Nicolas’ client wants everything cruelty free, including the fabric. And then there’s Shirin’s who wants peacock feathers and a headdress like Cher. But don’t fret, little lady, at least this isn’t a pair challenge like last week!

It's another one-day challenge and designers are allowed to hit up Mood for two yards of fabric. It isn’t much but it might help, right? The workroom is nothing short of emotional this week as several designers are having a hard time creating a fabulous look. Shirin gets worked up, yet again, because she fears the dress will be a mess. Tears also flow from Gordana who, a divorcee herself, is quickly reminded of home and how much she misses her family. 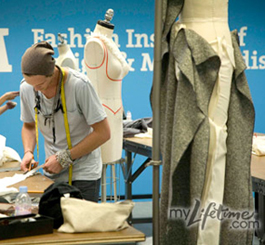 Then there’s Epperson, who doesn’t understand the challenge. He tells Tim he wants to use as little material from the dress as possible. Tim, however, has to remind him the core of the look has to be from the actual gown, making him restart his design. Logan seems to be having trouble, too. His idea of a woolen pants piece turns into more work than he had thought

While some creations might not fair as well as others, the clients all seem to be very happy with the results—and winning a clients heart is half the battle after all, right? But which creation is enough to win the judges’ hearts? Judging from what we saw in the workroom, it’s going to be a very tough call.

While Nicolas’ ensemble, which he deemed one of the “most hideous things” he has ever made, wasn’t gorgeous, it definitely suited his five-foot tall client’s, quirky personality and was safe. Althea’s fun and fresh dress was good enough, too, as well as Carol Hannah’s. 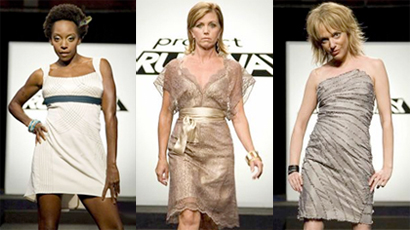 While Shirin’s client was way out there and not the most pleasant to please, she ended up scoring one of the best three looks. And, I have to give it to her, adding all of that stitch work was a great idea. Irina’s catchy, bronze dress was gorgeous, and the client truly glowed while working that runway. My pick was for her to win, but it looks like the title went to Gordana, whose tears seemed to have paid off, and so did her blacken hands. 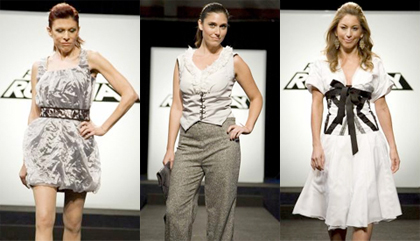 Christopher’s cheap-looking dress didn’t sit well with the judges. It had too much crumple and, as Michael Kors said, “it looks like tinfoil.” Cutie Logan’s sloppy ensemble didn’t please them either. His take on a tuxedo look appeared amateur and only left reminders of Oktoberfest in Heidi’s eyes. But it looks like PR’s hottest contestant has been saved again.
So then who’s left? Epperson’s frumpy ensemble, which also reminded the judges of a pirate wench, just didn’t cut it. But he did graciously packed up his station remaining thankful for all that he has learned.

It’s down to eight, and who will be next? Tune in next week, when designers must create a look for a multi-platinum artist, to find out.