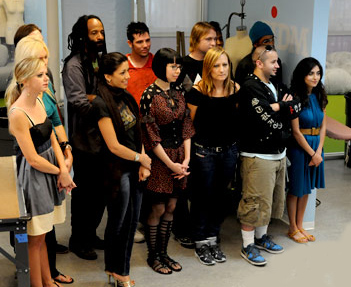 It's week four of PR and lucky thirteen of the sixteen designers are left. After last week's partners-in-crime elimination, the designers are anxious to showcase their unique talents once again.


The show starts off with Heidi's vague hint that they're designing for "Thirteen women who know exactly what they want." Uhhh. Seems easy enough..right?! But WHO are these thirteen mysterious women?


As Nicolas says "It could be anything from homeless people, to Eskimos." Imagine how surprised the designers were to see their very own models.


Challenge: The designers must create a look for the models to wear to an industry event. READ: A place where models go to mingle with other models to network and get jobs. So, the ladies wanna stand out, but still stay true to their own style.

The designers were already familiar with their clients...

It's the designer's first one-day challenge, and they've got 100 dollars to shop at Mood in just HALF an hour. Ahh!

The designers talk to the models and there are mixed feelings. Some peeps think it's gonna be a total breeze...but others are kinda freaking. Koji, Logan's model asks for lotsa lace, and a '50s, punk-y look, something he's not exactly familiar with. Shirin is also scared—her model wants a striking royal blue and gold number. Is it gonna look too costumey?


The designers head to Mood and shop, shop, shop! Then it's back to the workroom to race the clock. While they're sewing away, there's a few serious moments to reflect on just how many of their fellow fashionistas are missing. The competitive air is getting even thicker...who's gonna go home this time around?


There are mixed feelings about the tight deadline. Nicolas is nervous, but other designers feel they work best under pressure. 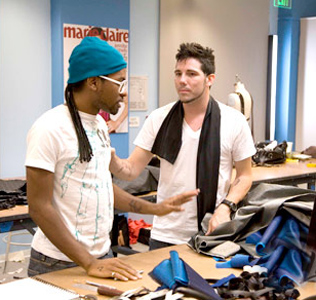 
Tick...tick...tick...time for Tim to check in! Althea explains her updated menswear-ensemble and Tim seems excited. But he seems a li'l on the fence about Christopher's "salad"-colored concoction.


Epperson scraps his model's request original request for a bright orange ensemble and goes with a much more subtle brown. She gave him a lot of stuff to work with: "flowy, strong, punk, cocktail, tiger...." How is he gonna put it all together? We're not too sure, but so far his piecey ensemble looks pretty awesome. Tim approves!


But Tim is totally unhappy with Qristyl's ruched "mess" that looks like "she just rolled around in bed."  After his critique, Qristyl kills her first creation completely and goes with a black dress instead.


Logan (love him!) doesn't want his model's punky princess look to get too "blue Smurf." Tim's a li'l concerned, too.


Carol Hannah's design looks pretty 'n' purple, but of course, Tim's got some creative criticism. Is that ruched and draped top gonna make her model look TOO OLD? Uh-oh! 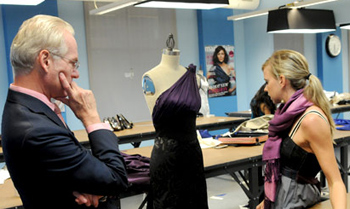 Tim and C.H. chattin' it up

Time for the models to try on. Did the designers make them happy?


Epps is fuhhh-reaking about his color change. Luckily, his model loves it. Whew. Johnny's got a lot of anxiety and keeps asking his model for assurance. She also seems like a happy customer!


Althea's outfit looks like it takes A LOT of intricate tailoring, but so far, so good for her model. Logan's model, Kojii, is a "Gothic Cinderella" of bright blue and black lace. "She loves the look, but will people be looking at her for the wrong reasons?" Logan wonders.


Shrin's model seems a li'l skeptical, since her frock is still in pieces. Qrystil isn't sure if her last-minute LBD is too simple. The day ends and the it's time to get a good night's sleep before the runway show. 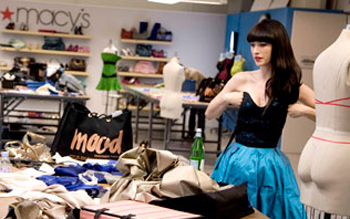 Kojii in Logan's half-finished creation. Hmm...can he make it work!?

The designers wake up and put the finishing touches on their creations. Some are confident (As Qrystil says "What woman doesn't love a chic black dress?!"), and some are a li'l scared. Logan, is glad he's "not playing it safe" but still eek-in' about his out-there ensemble. There are the usual last minute drams...broken needles, unhappy designers, and RUSH RUSH RUSH!  Then it's, hair...makeup...and time for the models to strut their stuff.

Weighing in on the judges panel are Heidi herself, along with Marc Bouwer, American designer, Zoe Glassner of Marie Claire and Jennifer Rade, a costume designer who's worked with Angelina Jolie. 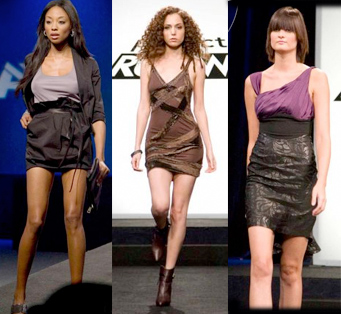 I totally agreed with the top three. Althea's winning outfit was AMAZING. Even Zoe, who "never" wears suits, said that she'd wear it (I would, too!). It was simple yet totally chic, and all three pieces were perf. It showed off the model's figure and was on point for an industry event. Epperson's dress had a great, fluid shape and just the right amount of the standout factor. The mixture of soft, elegant draping, and a more fashion-forward black flared-out skirt got the thumbs up from all the judges, and boosted Carol Hannah into the top three. 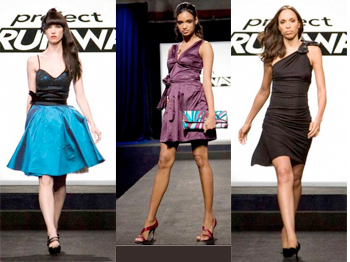 This week's fashion hall of shame...(Left to Right: Logan, Johnny and Qristyl)

Who'd we say Auf Wiedersehen to this week? The bottom three were Johnny, Qristyl and Logan. The judges thought Johnny's plum-colored dress looked too bridesmaid-y and um, wearable (aka not creative!). Heidi dubbed Qristyl's simple black dress "BORING," and all the judges thought it looked cheap! Logan was told that his Gothic Cinderella number would stand out "for all the wrong reasons." "You've just aged her fifteen years, which in the model world is like dog years," Heidi said. In the end, Qristyl was the one we said sayonara to this week.


My personal faves? Nicolas' simple white sheath with its silver piping detail around the neck and back. So futuristic and funky but not too over-the-top. Epperson's is my all-time fave this episode. It was somehow wild and still completely classy!  And the intricate design paired with a more muted color? I love. Ra'mon once again...OMG. Don't know where I'd wear it but the color and the dramatic flower detail...So. awesome. Don't hate, but I love Logan's design. It was so rocker and reminded me of something Betsey Johnson would do. The only thing I'd change up was the bulky lace (the judges were right, a li'l too heavy!). And I gotta agree, NOT something I'd wear to a model industry party (not that I'm going to any soon...but, hey...a girl can dream!).

BLOG IT, fellow fashionistas! Should Qristyl have gone home? Or would you have voted Logan off? What was your fave frock? What do you think is gonna happen next week?
‘Til next week, stay fashionably fab!
Photo Credit: myLifetime.com