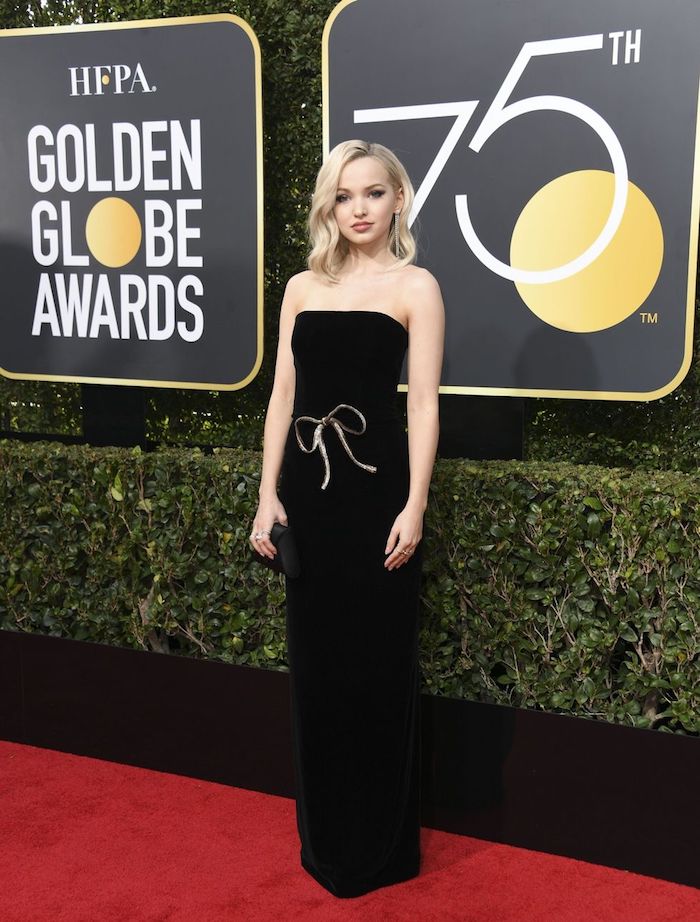 Grab some popcorn and claim the coziest couch spot: It’s awards show season! But this year, you might have noticed a larger buzz surrounding this season's shows, like last night's Golden Globe Awards. While plenty of awards were served up at the ceremony as always, the night was really about the #TimesUp movement.

The movement exists as a call for an end to sexual assault, harassment and inequality in the workplace, as the website states. Though the movement reaches beyond the entertainment industry, many actors and actresses pledged to wear black to the Globes to stand in solidarity with those who have been silenced by discrimination, harassment or abuse in all industries and bring attention to the cause. The movement is essentially saying that “time's up" on those in power getting away with such behaviors.

Sure enough, the red carpet was a sea of black gowns and tuxes. Many have also pledged money to the #TimesUp legal defense fund, which provides legal representation and support to men and women have have experienced harassment, abuse or assault in the workplace while in pursuit of their careers.

We think that's amazing. And we agree with The Cut: This year’s Golden Globes red carpet wasn't about what designers these actresses and actors are wearing—though the fashion industry is just as important as any other, and designers deserve praise for their artistic talents—it was about the meaning behind the choice of so many to unite by wearing black, because supporting and believing victims is important.

The #TimesUp movement has received criticism, too. Some voices on Twitter, such as Rose McGowan, have questioned the efficacy of a sartorial statement; some worried that the movement could be interpreted to mean that women should respond to sexual harassment by adjusting their attire; others suggested that only a full boycott of the event would make a true statement.

But, as Kerry Washington explained to the LA Times, many actresses felt it was important to support the women being nominated by attending the Golden Globes. “We thought it was stronger to participate, but make sure we had a public sign of support.”

One thing is certain: The #TimesUp movement has ignited a conversation about the best way to support victims of sexual abuse—and no matter how you look at it, that’s a win. In our fashion round up below, we're showcasing those who decided to support and believe. 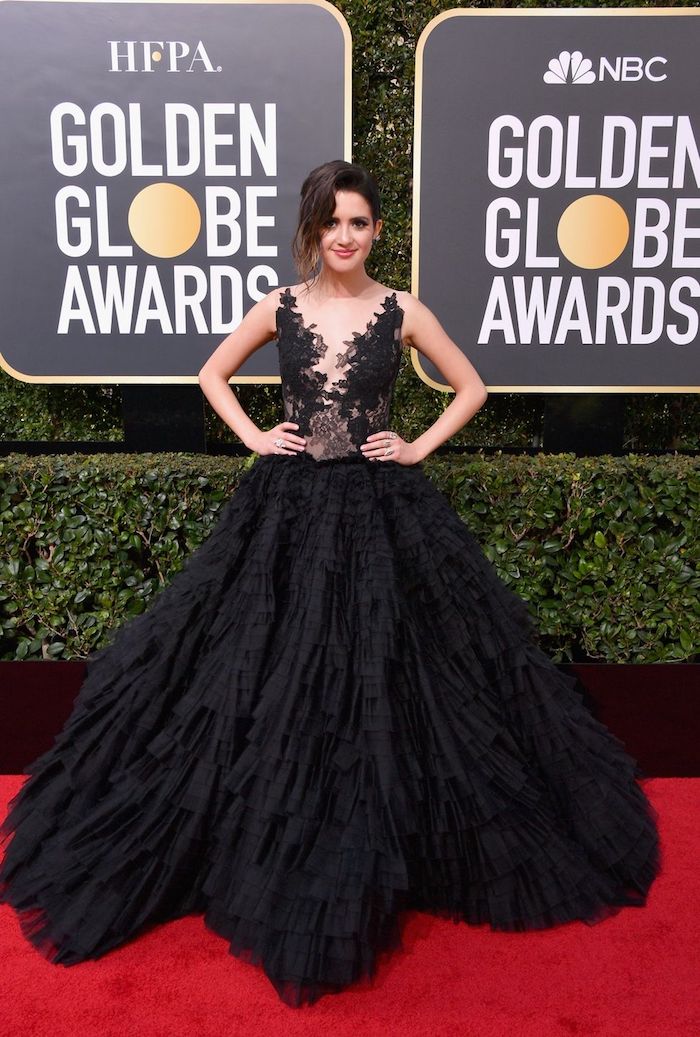 Finding a dress as bold and beautiful as her personality must have been a tall order, but she nailed it!

Last night was the Descendants 2 star's first ever Golden Globes (!!!). 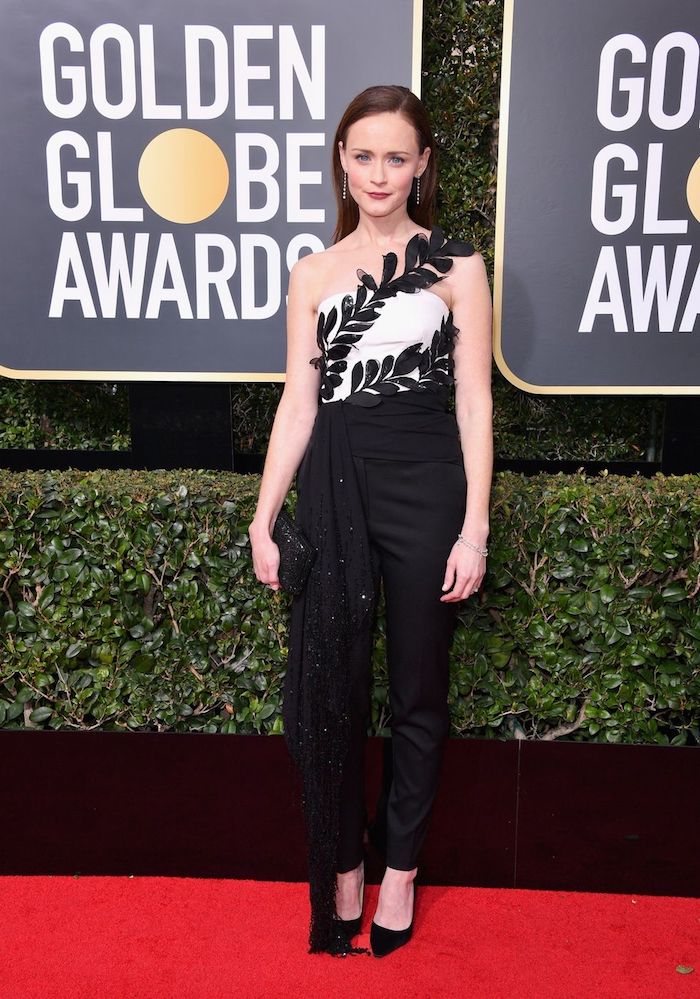 This Gilmore girl's face says, "I came here to win." And her Hulu show Handmaid's Tale did just that! They nabbed a trophy for Best TV series - Drama. 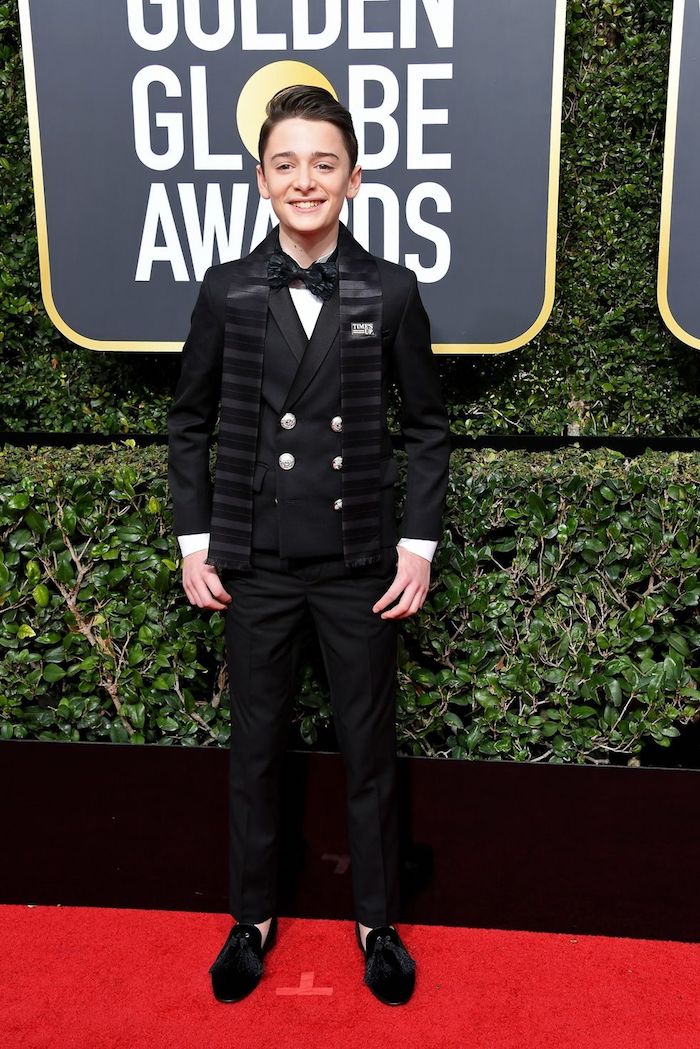 Will Byers is alive and well! The actor walked the carpet with his Stranger Things costars: Sadie Sink, Gaten Matarazzo, Caleb McLaughlin and Finn Wolfhard. 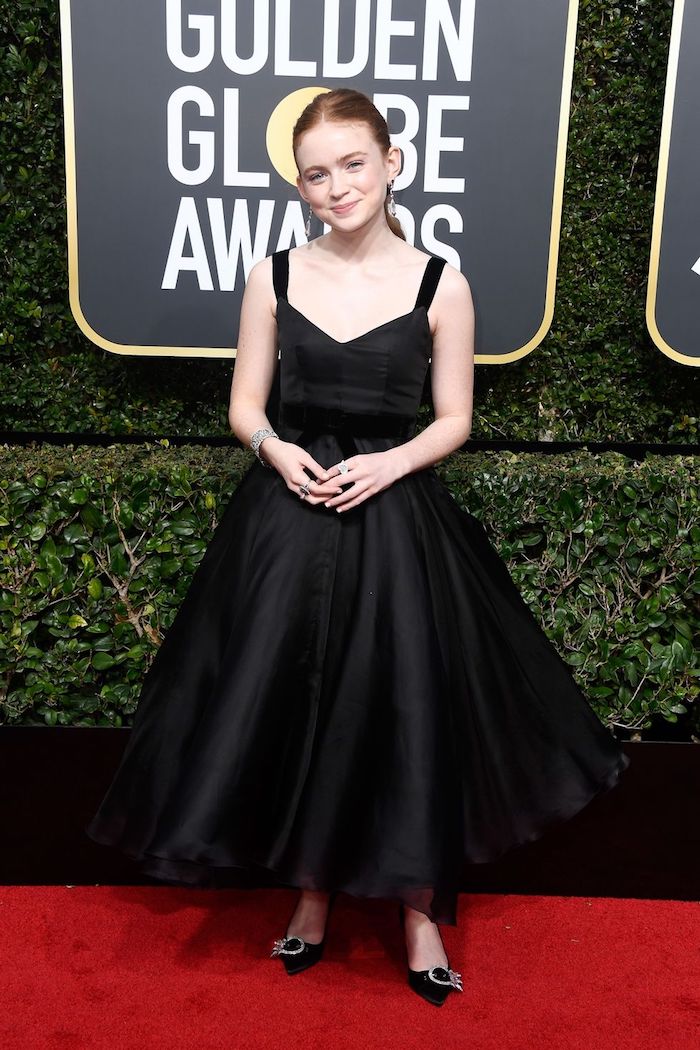 Speaking of Sadie, the actress described her first ever Golden Globes carpet as "crazy." We can't imagine! 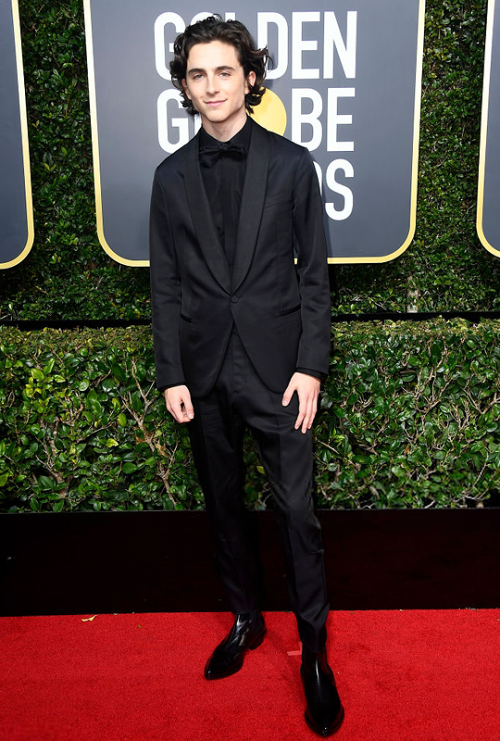 The 22-year-old Call Me By Your Name and Lady Bird actor rocked something unconventional on the carpet: Chelsea boots! 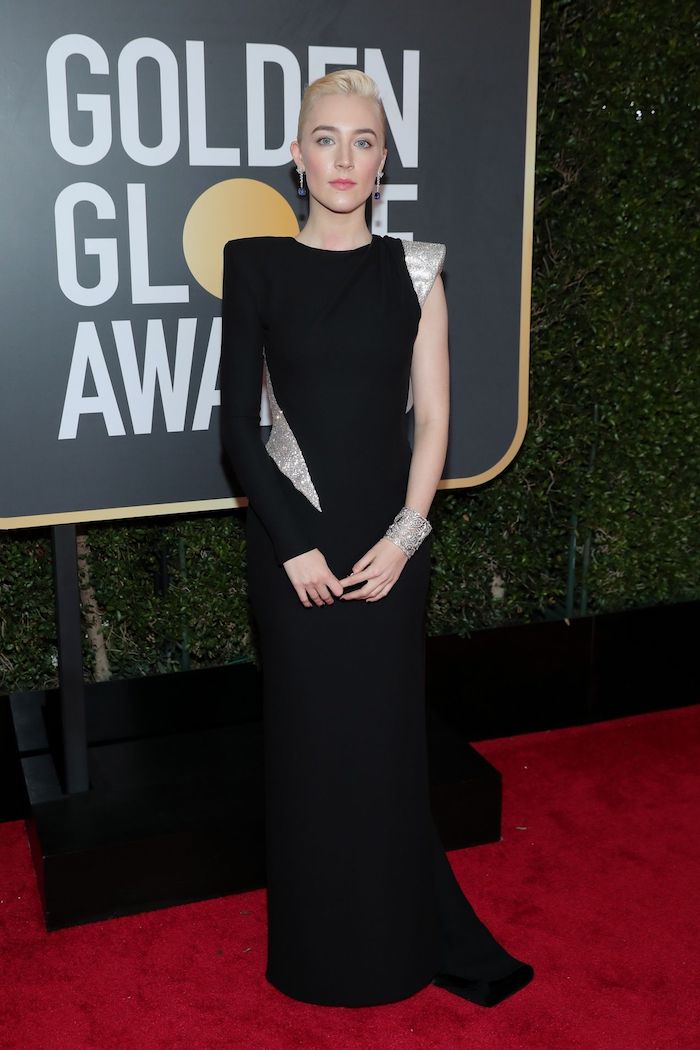 Take note: When you're nominated for Best Actress in a Motion Picture - Comedy or Musical (and you win!), the only appropriate way to celebrate is with a metallic shoulder pad. 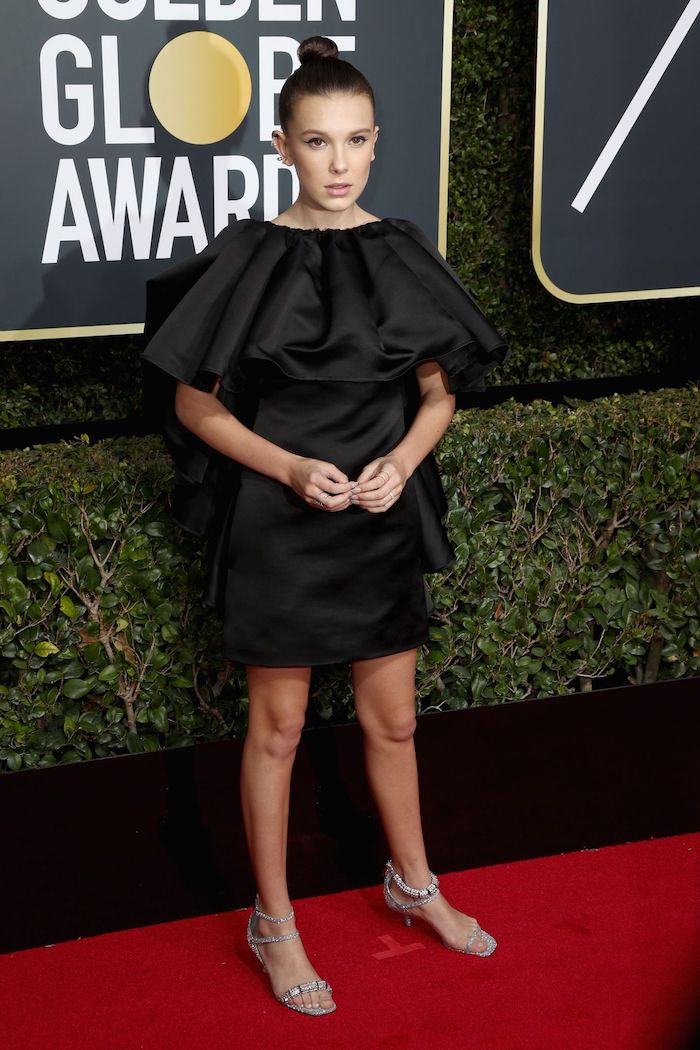 MBB is just as fierce on a red carpet as she is on screen as Eleven. Love! 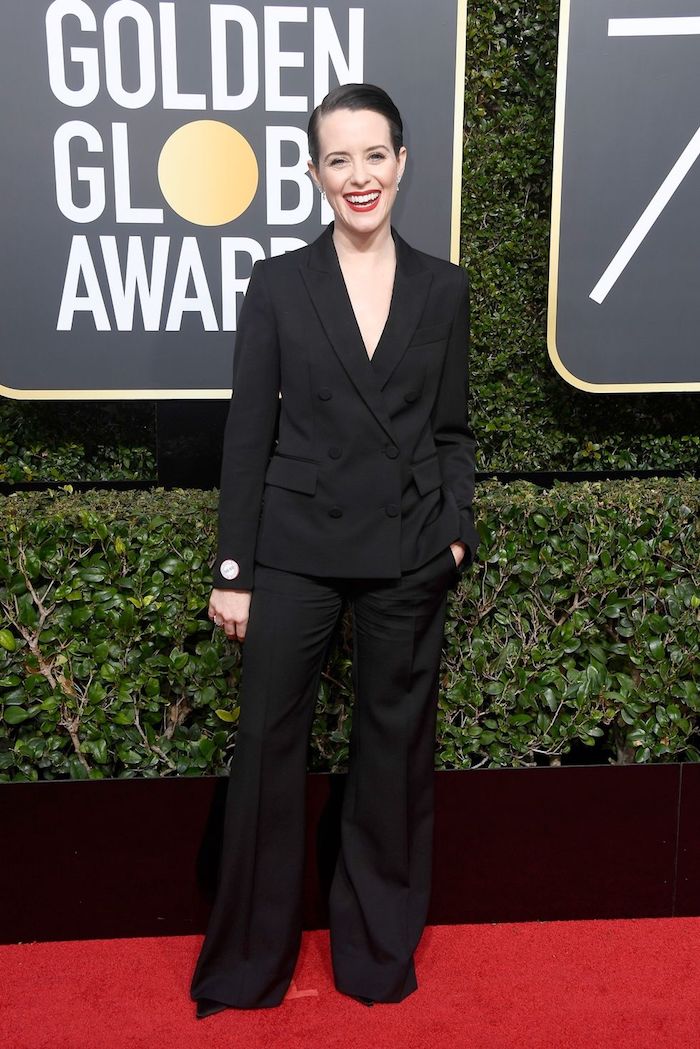 The Crown actress is quite literally wearing the pants, and we love that.

What was your fave Golden Globes moment or speech? Sound off below!