Why there’s nothing wrong with being “basic” 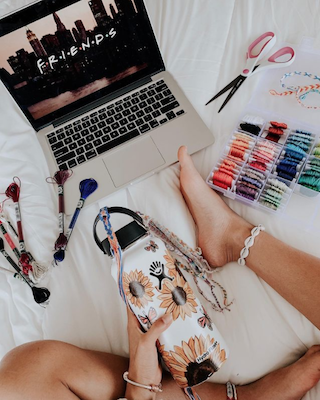 This essay reflects the opinions and thoughts of the author.

We all remember the VSCO girl summer, right? Messy buns with colorful scrunchies, hydroflask water bottles thrown inside Kanken bags, shell necklaces and Birkenstocks at the beach. Soon after, this style (like countless ones before and after it) was deemed "basic."

Unfortunately, the "VSCO" girl phenomenon is not a singular occurrence, and this kind of thinking is not constructive or good for anyone in the long run, especially for young girls. We're here to explore what constitutes being basic and why it's problematic.

The bland, the trendy and the mainstream. Basic can mean a lot of things, but above all, is nowadays used as an insult, *especially* directed at girls.

Basic girls can be recognized by their interests—pumpkin spice lattes, "live, laugh, love" and #girlbossery, to name a few.

This popular app's new viral word of the season is "cheugy," a rather vague term that means trendy, but in an out-of-date way—*uncool.*

This mostly applies to things popular in the mainstream, especially feminine ones. Skinny jeans? Cheugy. Being a fan of popular TikTokers like Charli D'Amelio? Cheugy. UGGs? Cheugy. Starbucks? Cheugy. Not only does this cover physical things, but also ways of speech. Phrases that are associated with millennial women (like "I did a thing") are also considered cheugy. In fact, by now, the word "cheugy" itself may be considered cheugy.

Previously harmless words like "basic" and "cheugy" have developed into derogatory ones targeted to make girls, especially teens and tweens, feel insecure about their own interests.

Teenage girls get a bad rep

The culture of hating teenage girls

The sad truth is that the internet is *not* super kind to young women. Teenage girls are largely perceived as frivolous, lacking substance and depth. Traditionally feminine things, like the color pink, are often demonized and looked down upon.

In countless popular teen movies, the antagonist is often a mean Barbie girly-girl, clad head-to-toe in pink, feminine clothing. Girls in middle school and high school are shamed for being into boy bands or loving Taylor Swift (Reputation era, much?).

Because of all the shame of mainstream interests circulating the internet, young women are often scared away from being themselves, instead feeling the need to obsess over the way they appear to others. And, for the most part, it's only a girl thing.

Tons of guys enjoy things like football, following their favorite team with fervor. However, their interests aren’t called cliché or basic. They can enjoy whatever they actually like. We've now reached a point of judgment on girls so internalized that ridicule is extended onto other girls by girls themselves.

If you were raised a girl in society, it's likely an unfortunate given that you have internalized misogyny. The projection of sexist ideals internally and externally, even if we don't always realize it, is so prevalent in everyday life that it's hard to notice sometimes. The need to be anything-but-basic gives rise to waves of media tropes like the "i'm not like other girls" or the "pick-me girl" phenomenons, all describing girls who are trying so hard not to be basic, they become basic. Again—*zero* way to win.

In defense of basic

Basic is mainstream and basic is popular, but basic isn't necessarily bad. In fact, one of the key facets of a Basic Girl is that, in her mind, her basic life is pretty awesome—and that's a really great thing. Basic girls should be able to enjoy their basic interests without getting hate for them. After all, who is it hurting?

If all of Twitter is gonna make fun of my fall photos, at least pick some good ones! 🤣 Super proud of these. For the record, I do like pumpkin spice lattes. Cheers! ☕️ pic.twitter.com/QzflqTwqAE

Just because your interests are mainstream doesn't mean they're bad. You're not mindless if you're just following the popular trends—things are popular for a reason, and high recommendations allow girls the perfect opportunity to discover new interests. Take Legally Blonde, for example. Just because Elle likes mani-pedis and pink glam doesn't mean that she can't become top of her class at Harvard Law.

Common tastes and depth are not mutually exclusive—they can coexist. Mainstream interests give girls the opportunities to be a part of a larger community of people who share similar likes, whether that be a movie, TV show, song or aesthetic.

We *need* to stop putting down young girls for what they like. Wear your UGGs and scrunchies, get that Starbucks, stream Taylor Swift 24/7 if you want (relatable).

Because you know what? There's absolutely nothing wrong with being basic.

All GIFs via GIPHY. Slider @melanie_locke.

THE WITH ME SERIES CONTINUES

On Siena's first night in King City, a near-fatal accident introduces her to dangerously handsome Jason Parker. Will a local mystery bring the two together...or will their differences tear them apart? Enter to win here!