Make your school great again with these 4 inspiring girls 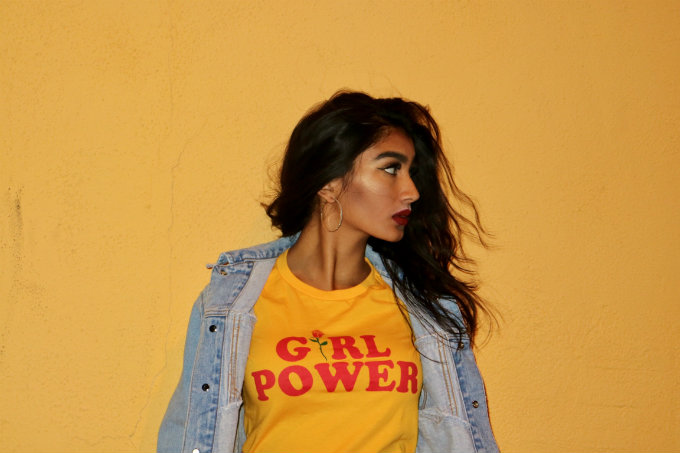 Girls are changing the world—and they’re starting right in their own schools. Here, four teen advocates share the inspiring stories of how they shook things up— and offer actionable advice for how *you* can be the change, too. 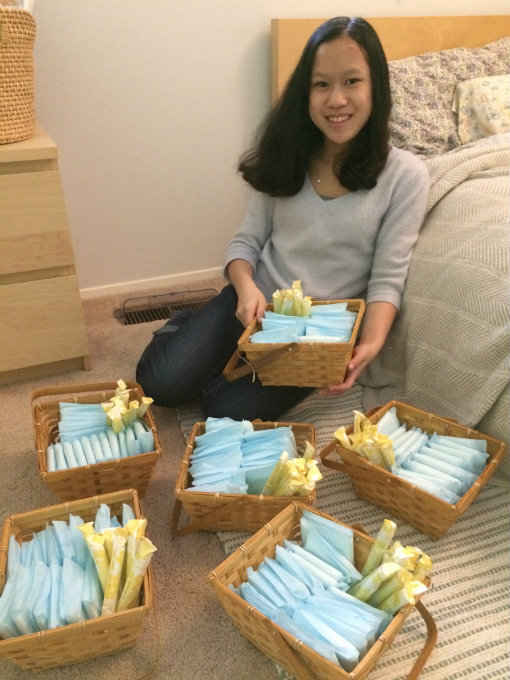 Make periods popular
Because your period shouldn't affect your potential.

What would you say if you walked into a public bathroom…and had to pay for a piece of toilet paper? Or, even worse, what if the machine that sold said TP was totally out of stock?

That’s the question that Cordelia Longo, 14, asked herself at school one day when she forgot to pack a pad—and then, of course, got her period. “No school would ever expect boys, if the toilet paper ran out, to wander around campus with a mess in their pants, missing class time while they searched for dimes to buy toilet paper or asked the school nurse for help,” she says. “Yet we expect girls to do this every day.”

Cordelia decided to petition the administration at her middle school for menstrual equity (a term coined by activist Jennifer Weiss-Wolf, author of Periods Gone Public), outlining all of the reasons why it’s important to provide basic hygienic products in school bathrooms. She went from class to class, eventually collecting signatures of over 100 students and teachers. In the end, she persuaded the school administrators to fix the problem—a move that was instituted in the district’s high school as well.

While most students—both boys and girls—were extremely supportive throughout the process, Cordelia says she did receive a few snickers during her discussions. But she remained motivated in her mission. “The more we talk about menstruation as a normal bodily function that we can’t control, the more comfortable and accepting people will be,” says Cordelia. “We just have to be brave—there’s no reason to be embarrassed.” 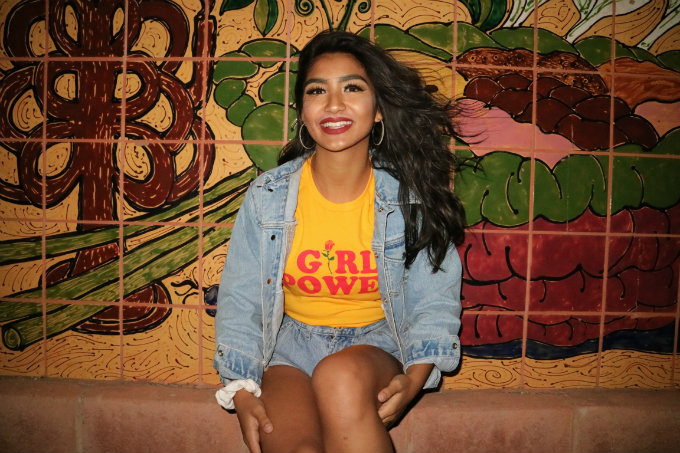 Strive for smarter sex ed
Because your body is your business.

“You guys already know this stuff,” the health teacher said to Deja Foxx, now 17, during their sexual education unit. But although he implied that students were already informed on the subject matter—either from their parents or other resources—that wasn’t the case for Deja. Up until that moment, she had found the health course (which covered other issues like drugs and alcohol abuse) to be helpful and informative. But when it came to sexual ed, a topic Deja considered essential to her personal health, there was a major shift.

“The school brought in a ‘community partner’ to teach an abstinence-only approach,” she says. “I couldn’t get answers to the most basic questions I had regarding my sexual health.”

So she set out to change the curriculum. A comprehensive sex education (CSE) program, Deja argued, would give kids info on everything from sexual abuse and harassment to sexual consent.

“We need to teach kids, even at a very young age, how to stand up for yourself and how to get help,” she says. (Currently, only 13 states require a CSE curriculum to be based in fact.)

After months of advocating for improvement, Deja is now a member of the committee that’s reforming her district’s sex ed curriculum—and she’s just getting started. “I hope to study political science, get a law degree and become a politician. I want to advocate for students, young people, immigrants and people of color,” says Deja. “But regardless of what I’m doing, I’ll always be a community organizer—it’s just part of who I am.” 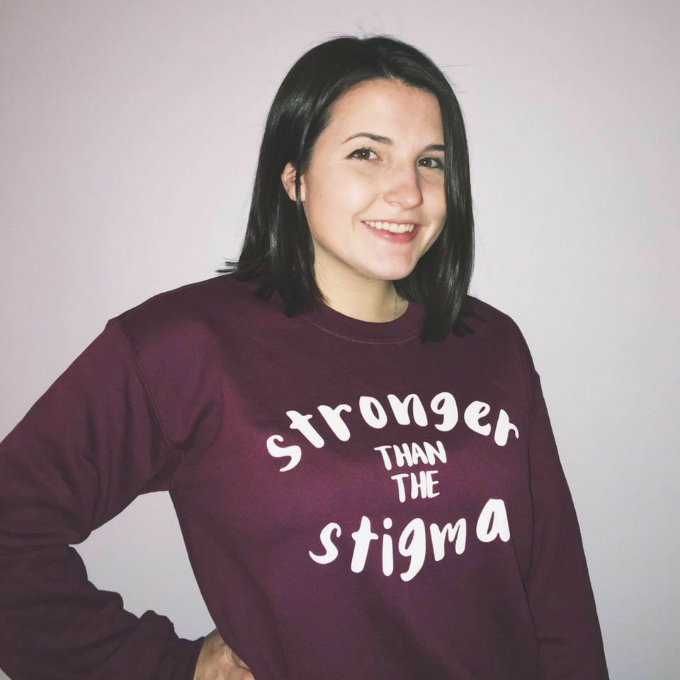 Being a teenager is tough—but Gabby Frost, 17, wants you to know that you don’t have to go through it alone. Her organization, Buddy Project, is a platform meant to prevent suicide, self-harm and eating disorders by connecting teens for friendship and support through some of the hardest times in life.

“I was a 15-year-old fangirl connecting with these other kids on Twitter when I realized many of them were suffering from various mental illnesses, self-harm addiction and suicidal thoughts,” Gabby says of what sparked the idea for Buddy Project. “Just having a shoulder to cry on is extremely beneficial.”

Although Gabby stresses that having a buddy isn’t an alternative to professional help, it is a healthy way to vent and sort through a problem. And, with one in five people suffering from a mental health condition, Gabby believes that a program like Buddy Project is as important as ever.

Now, Buddy Project is expanding beyond the screen—and into schools— with a new campaign that uses bold signage (IRL and on social media) to blast out messages that aim to create an open dialogue and destigmatize mental illness. “Raising awareness and educating others is so important,” she says. “Having just one friend who understands can make the biggest difference in someone’s life.” 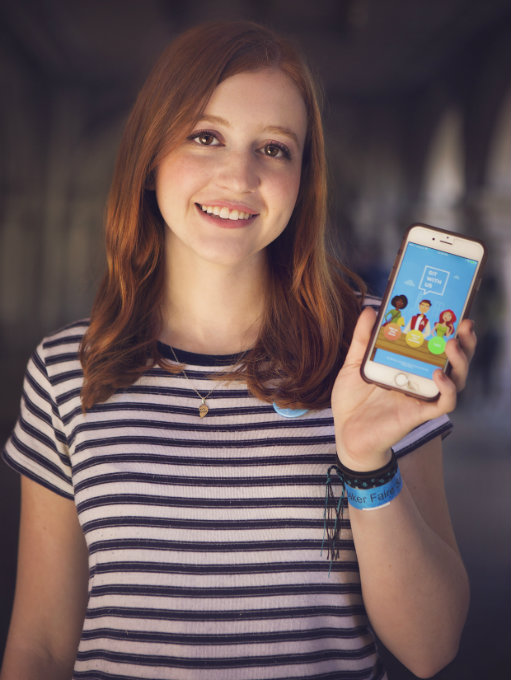 Create a kinder cafeteria
Because no one should have to eat alone.

When Natalie Hampton, now 17, was in middle school, she was attacked physically, verbally and online by her classmates. But that, she says, wasn’t even the worst part: “Eating lunch alone—and the isolation and embarrassment that came with it— made me feel vulnerable and worthless.”

The experience led her to develop the app Sit With Us (free on iTunes and Android) to ensure that other kids didn’t have to suffer in the same way. The app’s concept is simple—and inspired by what Natalie was doing IRL once she switched schools. “Whenever I saw someone eating alone, I’d always ask that person to join our table because I knew exactly how they felt,” she says. “They became some of my closest friends. I never would have met them if I hadn’t initiated those conversations.”

Sit With Us users create a profile page. If you choose to be an “Ambassador,” you pledge to host lunches where anyone is welcome and will feel included. Otherwise, users can search for tables to join.

“Studies show that student-led anti-bullying initiatives are much more successful than those led by adults,” says Natalie. “And even if you don’t use the app, you can embody the spirit of Sit With Us and check in with classmates who seem isolated. You never know how much of a positive impact you can make in some-one’s life simply by noticing them.”

This article was originally published in the August/September 2017 issue of Girls' Life magazine.

POSTED IN LIFE, Get Inspired, International Day of the Girl