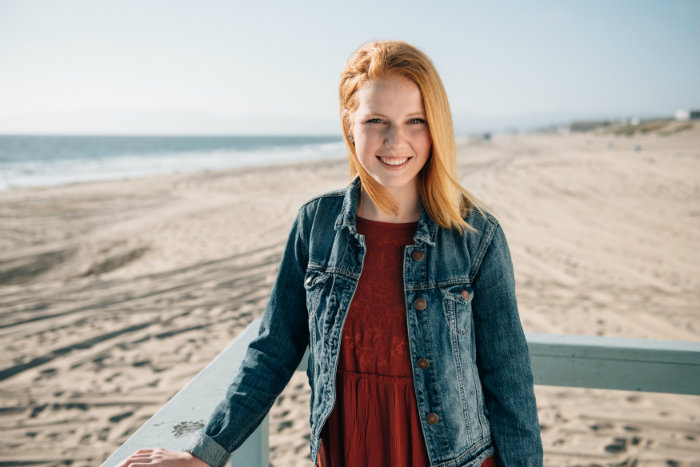 Like most girls, Kennedy has moles and freckles on her bod. And with regular trips to the dermatologist growing up, she's always been aware of the do's and don'ts when it comes to taking care of her skin. So when the California teen randomly noticed a not-so-normal spot, she knew something was *definitely* not right...

“I noticed the mole in spring of 2015 and it was unlike any mole I had ever seen before. It was pink whereas all my moles had been brown in the past. Block the Blaze had come to my junior lifeguard program over the summer and had said that melanoma could show up as either pink or blue moles,” Kennedy explained. “When I saw that pink mole, I remembered that and instantly knew this was something to be concerned about.”

Kennedy is among more than 80,000 people diagnosed with melanoma each year and, according to to the American Academy of Dermatology, it is currently estimated that one in five Americans will contract skin cancer with incidence of melanoma. P.S.: That statistic is increasing even faster in girls than in boys, yikes.

What exactly is causing this scary skin stat? Tanning beds and lack of proper sun protection, mostly. Not to mention that because the cancerous moles are often mistaken for beauty marks, they regularly go unnoticed. But thanks to the work at Block the Blaze, a program designed to educate teens about sun protection, Kennedy was able to recognize the signs early on, move forward with treatment and have the mole removed.

"I learned that it's really imporant to voice your concerns to your doctor. You know you're not a professional, but you know yourself (and your body) better than anyone. Don't be afraid to voice your opinons," Kennedy urges.

If you see an unusually shaped pink, brown or blue mole on your skin, especially if it wasn't there before, contact your doctor immediately. It's better to get it checked out and be wrong rather than keep quiet and potentially face a major health scare. And if you aren't seeing a dermatologist once a year, ask your parents if you can start. They're a great resource for everything skin-related and can help you detect any problems before they're too serious.

With summer just around the corner, it's *especially* important that you educate yourself and take the proper precautions to make sure you're staying safe in the sun. Kennedy recommends sunscreen always (that means every day, even if you aren't at the beach or the pool!) and wearing hats and long sleeve garments like rash guards as much as possible.

How do  you protect your skin in the summer? Comment below!