Is he flirting or is he just being friendly? 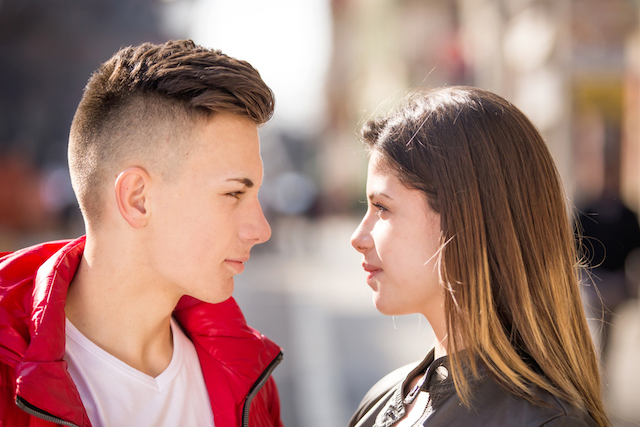 Why is it that sometimes he seems *totally* into you, but other times he barely knows you exist? Whether he's actually into you or unintentionally flirting, mixed signals are no fun. Here's a guide to deciphering just what he means when he asks to hang out of the blue or cancels plans last minute.

He texts you out of nowhere
It's been two whole weeks since you've texted, and all of a sudden he wants to know how your basketball game went. Uh, what? We have our phones on us 24/7. It's possible he's been busy with school and family, but it's more likely that he sees you as a friend and is hitting you up to make conversation and check in. But if he begins texting you similarly thoughtful things more frequently, the tides might be changing.

He talks about other girls when you're around
It's so cool that his friend Emilia got the lead in the school play, but does he *have* to talk about how great she is all period? If the girl is his friend, he's probably just excited for her! After all, she's been practicing her lines for months. However, if he's chatting her up in the halls instead of paying attention to you—the girl standing *right* next to him—chances are he's not interested.

He reads your texts and takes forever to reply
Really, how hard is it to say, "Hey, I'm doing well! How are you?" when you start a convo with him? There are two ways to think about this: He's not making the time to text you back because he doesn't want to, or he's playing hard-to-get. Either way: ugh! If he seems uninterested every time you try and make conversation, he probably isn't looking to date. But if his delayed responses are flirtatious and drive the conversation (questions, witty remarks, etc.) then you've got the greenlight to play on.

He acts interested over text, but not in school
Nervousness can play a part in this totally mixed signal. After all, it's *so* much easier to shoot a text than think of a witty comeback IRL. You shouldn't stand for being ignored in school, though, so the next time you're texting, bring up his uneasiness to chat in person. His answer will let you know if he's just being polite when you text him or if he's simply jittery around you because he likes you.

He avoids eye contact when you catch him staring at you
Ah, the age old "I wasn't looking at you" trick. Maybe he was actually zoning out (really, who doesn't during a two hour history lecture?) but if this is something you notice happening a lot, it's likely not a coincidence. He's staring at you and trying to seem nonchalant about it because—spoiler alert—boys get insecure too.

Reading guys can be tough. What kind of signals do you get from your crush? Share in the comments below!

Heart animals? Then we just found the best game ever

Star Stable Online is the girl-powered horse game of your dreams—and they're celebrating their 10th anniversary this year! Get *all* the deets on why it's so amazing HERE.