5 songs to introduce you to Aretha Franklin, the Queen of Soul

If you've been looking for a dose of soulful music lately, look no further than the Queen of Soul herself: Miss Aretha Franklin! Aretha Franklin was an acclaimed singer, songwriter and civil rights activist, and she was also the *first* woman ever to be inducted into the Rock and Roll Hall of Fame. Aretha lost her battle with pancreatic cancer in 2018, but her memory lives on, and she's regarded as one of the most influential female vocal artists of our time.

In celebration of the trailer for Respect—the upcoming biopic on Franklin's life—being released this past weekend, we've made a list of some of our fave Aretha Franklin songs to introduce you to one of the greatest female artists in history. Check out these tunes, and show Miss Franklin some good old R-E-S-P-E-C-T!

1. "Rock Steady" (1972)
Talk about rock and roll—this song is the definition of *groovy*. If you ever need a funky dance tune to get down to, this is it!

2. "(You Make Me Feel Like) A Natural Woman" (1967)
This one’s a classic! Written for her by the dynamic duo of Carole King and Gerry Goffin, this dreamy tune is a true staple of Aretha Franklin’s work.

3. "Respect" (1967)
If there’s one Aretha Franklin song you wanna be familiar with, it’s this one! This is the song for which Aretha Franklin's biographical film is named, and it's a *super* powerful and upbeat anthem for all of the independent ladies out there.

4. "Bridge Over Troubled Water" (1971)
This song is a *must* when you need a pick-me-up! It was originally written and performed by folk rock duo Simon & Garfunkel, but it wasn't long before Aretha Franklin made it her own. Her comforting voice paired with the song's reassuring lyrics is sure to calm your worries and let you know everything's gonna be just fine. (Fun fact: Miss Franklin also showed off her skills on the keys by playing piano on this track. And let's face it—she *kills* that piano solo!)

5. Freeway of Love (1985)
Set this one aside for your next road trip! This song won Aretha Franklin her 10th Grammy Award for Best Female R&B Vocal Performance, and it's the perfect tune for a quick trip back to the 80s!

Like what you hear? Check out this playlist for some more of Aretha Franklin's most popular music, and get psyched for Respect to be released later this year! 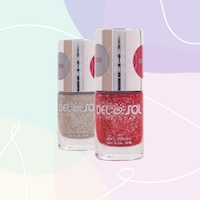