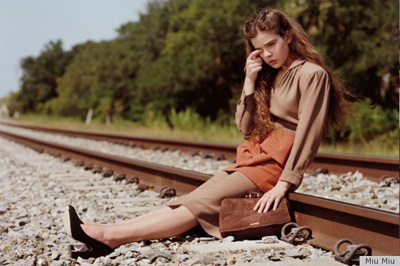 Hailee Steinfeld is one of our favorite teen stars, so we were shocked to read that one of her print advertisements for Miu Miu’s fall campaign was banned in the United Kingdom. New York Magazine reported that according to the Advertising Standards Authority, the photo in question shows her sitting on a train track, which is dangerous given her age.
Prada, Miu Miu’s parent company, responded to the ASA by stating that the Miu Miu campaign portrayed Hailee “on the set of an imaginary film,” and that she “could have easily moved from where she was sitting because she was not restrained in any way.” But the ASA didn’t alter their decision, saying that a child sitting on train tracks was “irresponsible.”

While we understand where the ASA’s coming from, it seems like Prada’s got a point, too. And besides, the campaign video showed Hailee eating pizza – isn’t that a positive message to send in the fashion industry?
Where do you stand, babes? Is the ad sending the wrong message? Blog about it!
Photo Credit: huffingtonpost.com

» What to wear right now: 12 days of dresses

WIN BIG! Boot up 2012 with an Archos tablet for you and your bestie