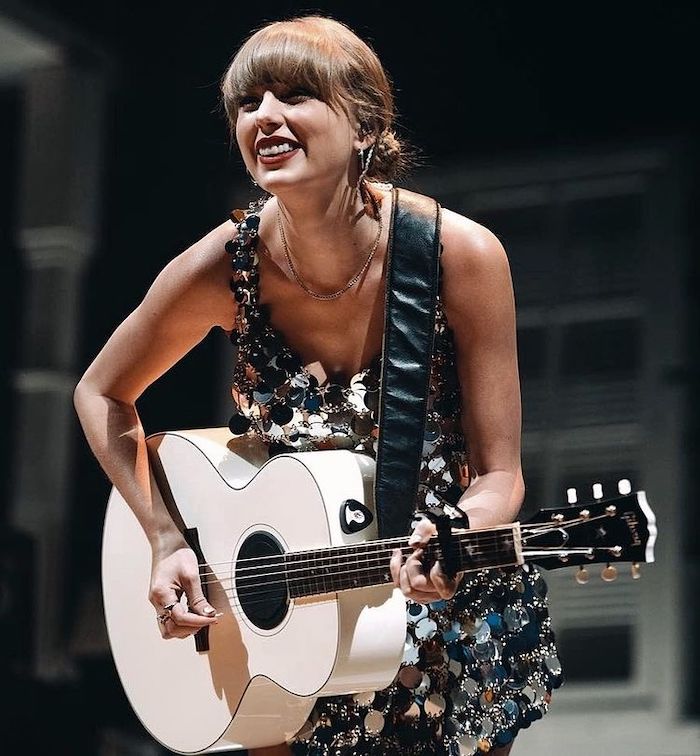 Drop everything now: Our fave popstar stopped by the O2 Arena in London on Jan. 12 to perform at The 1975's concert! The unexpected appearance gave us *so* many feels. We're here to break down all the best moments from the night.

it’s like i can feel time moving…🥹🥹 #AntiHeroTeaTime @taylornation13 pic.twitter.com/O6xYqq5kcz

Taylor took the stage looking, well, pretty bejeweled. Her "mirrorball"-inspired number also gave us major throwbacks to Fearless-era Tay. To top it all off, Taylor's hair was styled in folklore-era buns. We love to see it!

Blondie didn't come empty-handed, though. Guitar in hand, she told the crowd, "I'm gonna play something I've never played live before. It would be so presumptuous to say 'If you know it, sing it,' but if you do, sing it," and started in on the Midnights lead single, "Anti-Hero."

Even though the fans were there for The 1975, they screamed the lyrics, even swapping the line "tale as old as time" with "Taylor, you'll be fine," just as Jack Antonoff did on the Bleachers version of "Anti-Hero." She also sang a cover of The 1975's "The City."

Although the appearance was the best mid-week surprise, it has Swifties even *more* excited for the Eras Tour, which kicks off in Glendale, Ariz. on March 18. By combining aspects of different eras in her outfit, Taylor gave us a glimpse of what we might expect during her own shows. Check back on girlslife.com for tour coverage when the time comes!

Until then, check out these other posts:
🪩 Build your dream Taylor Swift playlist and we'll tell you which season matches your vibe
🪩 Everything you need to know about the artists opening for Taylor Swift's The Eras Tour
🪩 Which Taylor Swift era are you?

At teatime, everybody agrees—you should follow us on Insta @girlslifemag!

POSTED IN TRENDING, All Celebs