EXCLUSIVE! Vampire Academy's Jonetta Kaiser: "I almost gave up on my childhood dream—here's how I made it happen" 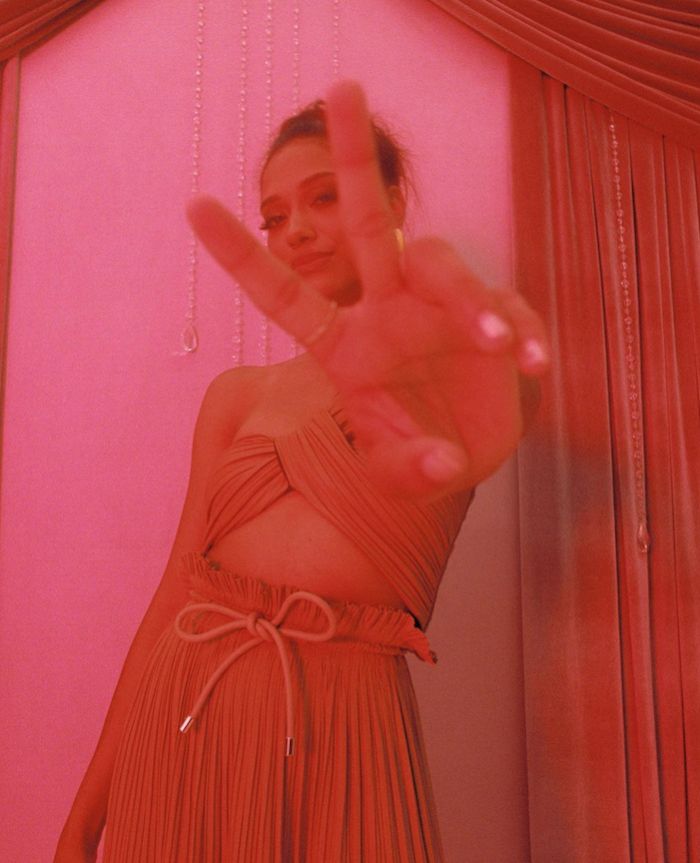 Spoiler alert: It took a lot of hard work.

These days, my schedule is jam-packed with learning lines and filming scenes as Sonya Karp in the Vampire Academy TV series. But 10 years ago, I was a middle schooler in a small town in Louisiana wondering if I'd ever bring my vision board to life.

Let's go back: Ever since I was a little kid, I wanted to be a TV or movie star. Relatable, right? I'd watch Disney Channel and my favorite fantasy series and dream of being the one onscreen, not the one watching.

But for someone who didn't know any actors IRL and lived far away from Los Angeles or New York, was there any hope of creating the life I pictured?

I won't say I didn't try. I had my sister take makeshift headshots of me in our backyard. I persuaded my mom to drive all the way to a casting event in Florida. But my life was busy with school and soccer—and especially after I was diagnosed with scoliosis at 14, acting started to seem like something more likely to exist in one of the fantasy books I devoured than something I could *actually* accomplish. Funny thing, though: When it comes to true dreams, they have a way of, well, not going away.

I pushed acting out of my brain and decided to go to college to pursue biochemistry instead. I developed an interest in web design. I was doing well...but as the semesters went by, it became clear to me that I just wasn't happy. I felt like I was doing what I was "supposed" to do instead of what I was really *meant* to do.

I started spending a lot of time alone. My primary activity? Binge-watching Game of Thrones. Nights with Westeros drama became my way of escaping reality—one where I wasn't confident that I could achieve my genuine goals and had chosen to pursue a "safer" plan instead.

During one episode I found myself sobbing uncontrollably—and not because of one of the show's infamously shocking death scenes. No, I was crying because I realized that I was sitting on my couch watching other people do the thing I so desperately wanted to do with my life. I wanted to be an actress.

So I took the biggest leap of my life and dropped out of school. Of course, I wasn't going to be a star overnight.

Instead, I spent 12 hours a day on movie and TV sets working on tiny parts as an extra. At night, I'd submit my new headshots to agencies.

Like any good fantasy novel, it took tons of twists and turns to build to the satisfying ending. Acting isn't easy—it takes just as much motivation as any of my biochemistry courses. But thankfully I was obsessed with learning everything I could.

When I finally got an agent who was willing to take a chance on me, I moved to the West Coast and auditioned constantly. To stay afloat, I started my own business in web design, working with coding clients during my non-auditioning hours.

But when I landed my role in Vampire Academy, it was all worth it. Because when you're pursuing a true passion, even the toughest moments feel like triumphs. And when I followed my heart, I was always able to find happiness...even in the less-than-glam times.

Think about the one thing that you've known your whole life you were meant to do. And no matter where you are on your path, find a way to pursue it—even a little bit. Because if I can get there, I know that you can.

Peep Jonetta in Vampire Academy, streaming on Peacock—and follow along with her on IG @jonettakaiser!

Loved this article? Check out these next:

💌 Ava Kolker spills on her newest single "All To Myself"
💌 Annaka Fourneret spills on The Really Loud House and her best confidence advice
💌 Kylie Cantrall's future is calling...and she's picking up

Hey, girl! Just wanted to let you know that this story originally ran in our December/January 2023 issue. Want more? Read the print mag for free *today* when you click HERE.